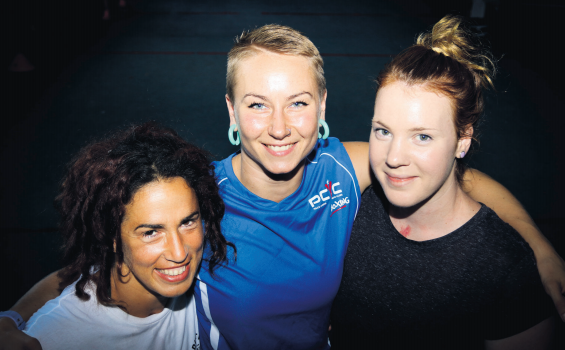 Anja Stridsman, 29, and Bianca Elmir, 33, have recently made the move to the Peninsula to train with boxing coach Joel Keegan. Originally from Sweden, Stridsman met Keegan while living in Sydney, and commuted to the Peninsula for two years before making the move. Since the inclusion of women’s boxing at the Summer Olympics in London 2012, Stridsman has had the Games in her sight.

“I set my bar really high from the start. “I’ve been working towards that since the beginning,” Stridsman said. Having limited opportunities to train and fi ght with opponents of the same gender and weight class in her home town of Canberra, Elmir also decided to pack up and make the move. “Joel has got a reputation for being a very thorough coach. He’s produced many good boxers,” Elmir said. “Boxing asks a lot out of its athletes, so if I’m going to do it, I’m going to do it properly,” she said.

Both women are currently training for Commonwealth Games selection, which includes training six days a week, twice a day, sometimes more. As amateur fighters, both Stridsman and Elmir maintain jobs outside their rigorous training.

Not one cent used to recruit a GP, says O’Neill