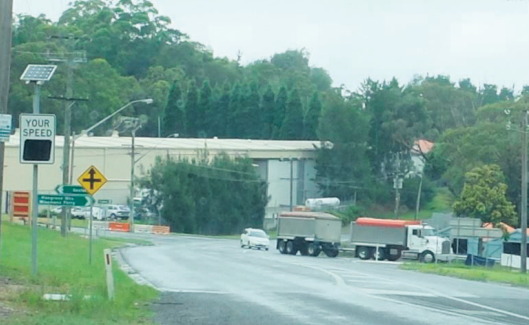 Truck traffic at the four-way intersection is of particular concern

The volume of haulage trucks using the Mountain Districts’ roads and intersections is unsustainable and roads could not cope with any traffic increase, according to a local truck traffic study.

Mountain Districts Association (MDA) has received many complaints about the amount of heavy truck traffic coming to and from Sydney into the local area in recent months, according to Ms Marilyn Steiner, who conducted the traffic study. “We have particular concerns about traffic associated with the staggered four-way intersection in Central Mangrove, because of the threat of an extra 110-plus truck movements a day which will be permitted access to the Mangrove Mountain Landfi ll via Hallards Rd off Wisemans Ferry Rd, should the landfill operator obtain a licence from the EPA to renew operations,” Ms Steiner said.

According to MDA, representatives from Central Coast Council asserted at a public meeting in September 2016, at the Mangrove Mountain Memorial Club, that no landfill would be coming from the Council’s tips. “It can therefore reasonably be assumed that most trucks carrying waste would travel from Sydney on the M1, exit on Peats Ridge Rd and end up going through the Central Mangrove intersection via George Downes Dve onto Wisemans Ferry Rd and then Hansons Rd. “Our concerns about future truck traffic on Hallards Rd were conveyed to Central Coast Council representatives at the September public meeting. “We requested a proactive traffic management plan and traffic survey, but there has been a disappointing lack of follow-up from anyone in Council. “Consequently, the MDA decided to conduct its own survey to provide some baseline data in the hope of prodding Central Coast Council into action,” she said.

Numbers of haulage trucks associated with the Central Mangrove intersection were recorded between 6:00am and 6:00pm on Wednesday, November 28, and again on Friday, December 9, 2016. The aim was to assess the likely additional impact of future landfill truck traffic associated with the Mangrove Mountain Landfill on nearby Hallards Rd. Only haulage trucks capable of carrying fi ll were recorded. “The number of haulage trucks passing through the intersection, three quarters of which were double trucks, was deemed excessive at 710 trucks on November 28 and 675 trucks on December 9,” Ms Steiner said. “Most trucks (over 70 per cent) travelled along George Downes Dve, and probably accessed Hansons Quarry a few kilometres west.

“The possibility of an additional 110 truck movements per day through this intersection raises many concerns, particularly among local residents who have no choice but to drive through there on their daily business. “Haulage trucks already constitute the bulk of heavy vehicle traffic (note other such vehicles were not counted). “MDA believes that Hallards Rd is not in a condition suitable for truck traffic of any description. “The access onto Hallards Rd from Wisemans Ferry Rd is narrow and lined with cars one side, with a bus stop on the corner which services the local schools. “It also has a three-tonne GVM limit on it for trucks. “Only two trucks accessed this road during our two day survey, with the landfill closed.

“The recent upgrading of the Central Mangrove intersection has alleviated some of the safety issues relating to general traffic movement through this intersection, but improvements are still needed, particularly with the general increase in haulage truck traffic. “The stop signs are still often ignored. “It is not practical to stop truck traffi c, but many of the complaints about trucks in the Mountain Districts relate to excessive speed, tailgating, not driving with due care and attention (including mobile phone use while driving), noise, dust and poor road conditions (crumbling edges, blind corners, narrow roads, frequent deterioration in road surface, and roads just not built for that volume and load of truck traffic). “There are ongoing complaints about the amount of improper fi ll coming onto private property, with little or no oversight or follow-up when Central Coast Council or the EPA is contacted.

“Rogue operators should be weeded out or discouraged by RTA inspection of licences and type of approved fill at weighbridges, and random police checks. “There is plenty of scope here for government agency intervention to make improvements relating to truck traffic in our area. “MDA looks forward to Central Coast Council conducting its own surveys and meeting with MDA and other residents to discuss viable options for management of haulage truck traffic in the Mountain Districts, and at Central Mangrove intersection and Hallards Rd in particular,” Ms Steiner said. A detailed report of the truck survey is available from MDA.