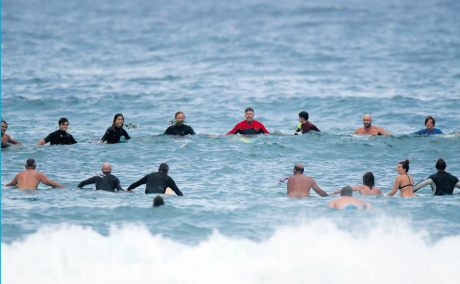 The afternoon get together at Soldiers Beach, the traditional home of the club, was attended by around 300 people, many travelling from afar to catch up with their old team and club mates. The afternoon was followed by a night of camaraderie at Norah Head Sporties. The gathering at Soldiers started with a Welcome to Country ceremony conducted Ms Tracie Howie, representing the local Gur-in-gai People. Ms Howie is a direct descendent of Bungaree, the leader of the people who were the original inhabitants, and after whom Norah Head was named.

To commemorate the occasion, members of the local surfi ng community co-operated to provide stories and photos for the new book. The publication was launched jointly by Federal Member for Dobell, Ms Emma McBride, State Member for Wyong, Mr David Harris, and the collaborator and main author, NHSF Life member and inaugural President, Tony Booth. A traditional Paddle Out Ceremony was held to pay tribute to passed members of NHSF and NHSA (the original club which operated from 1965 to 1972). A tag team event, comprising teams made up of young and old, past and present members, was won by the team led by Glen Winton.

Mr Winton is the most successful of Norah Head surfers, having been ranked in the top 10 on the World Professional circuit for fi ve years in succession during the 1980s. An Expression Session of all surfers was staged after the paddle out to celebrate the lives of all Norah Head surfers, past and present. The book was completed in time for the reunion, and features photos, reports from surfi ng magazines and newspapers, and the recollections and stories of Norah Head surfers dating back to the late 1950s.

It covers the stories of the first Norah Head Club, the Norah Head Surfers Association, including some classic old photos, and stories from their first Secretary, Bernice Olsen and early members, Bob Carroll, Kevin Millington and Brad Lambert, and the 40 years to date of the Norah Head Surfing Fraternity, with a great collection of photos and stories provided by a good range of members, past and present, who contributed to the project. Among the featured surfers are Norah Head Legend, Graeme Wood (Woody), who was a member of both clubs, and, the Harris, Spong and Winton brothers, who were part of the most successful era of Norah Head surfing, The Golden Era, from 1978 to 83.

Many other surfers have shared their stories in NHSF’s colourful history, and there are featured chapters include women’s and junior surfi ng. The book also features a chapter which pays tribute to those Norah Head surfers who have passed on, as well as recollections of NHSF’s involvement with protection of the local environment.

This article was published first in Wyong Chronicle