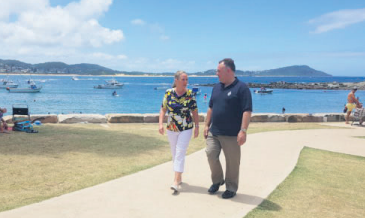 Ms Stephanie Foster has been named as the 2017 Terrigal Local Woman of the Year.

State Member for Terrigal, Mr Adam Crouch, was joined by NSW Minister for Women, Ms Pru Goward, to name Ms Foster as the 2017 Terrigal Local Woman of the Year. “Steph was the first Breast Care Nurse for the Central Coast and was a founding member of the Breast Cancer Interest Group in Sydney and surrounding regions,” Mr Crouch said.

“I congratulate Stephanie on her award and thank her for her outstanding service to her community in Terrigal.” Local award winners will be invited to join their Member of Parliament at the 2017 Women of the Year Awards breakfast hosted by the  Premier of NSW, on Wednesday, March 8, where the state-wide winners will be announced.