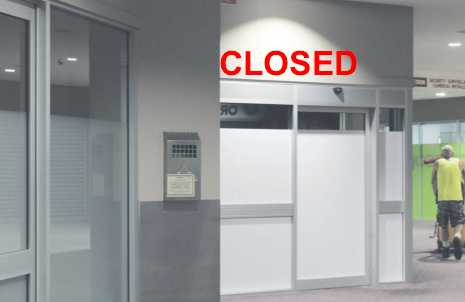 The empty NCAT rooms in the Gateway Building, Gosford

Not only has NSW Fair Trading closed the NSW Civil and Administrative Tribunal (NCAT) hearing rooms in Gosford, but it has also abandoned almost all the office equipment.

State Member for The Entrance, Mr David Mehan, said the NSW Government was said to have paid a substantial amount to fi t out the Gosford NCAT rooms over a decade ago. The purpose-built rooms were closed in December. “Upon abandoning the site, they left behind almost all of the offi ce equipment including chairs, modems and office furniture, all paid for by the NSW tax payer,” Mr Mehan said. The closure of the offi ce has sparked concern from local tenants’ advice and Legal Aid groups that services will not be adequately replicated while NCAT is forced to operate from multiple sites, according to Mr Mehan.

“Parties that have hearings that may take longer than the time available in the short group hearings could be forced to travel as far as Newcastle to have their cases heard,” he said “Both Gosford and Wyong Courthouse have not yet provided the facilities for telephone hearings to help members of the community who may live signifi cant distances from the hearing sites or have since moved out of the area.

“Frankly I find the whole process around the NCAT closure unacceptable. “The government have cut and run instead of renewing their lease and it’s going to have a significant impact on members of our community when they are most vulnerable. “We’re already receiving reports of miscommunications between local courthouses, and NCAT are causing cases to be dragged out or continually adjourned. “I have written to the AttorneyGeneral to seek further clarification around the decision but have not yet received a response. “This is another case of the NSW Government cutting services to the Central Coast and hoping that no one notices.” The NSW Department of Justice and Finance NSW were asked to respond to Mr Mehan’s statements.

In a written statement, Justice NSW said: “NCAT is still operating at Gosford and has no plans to close or leave the Central Coast area. “Most of the hearings will remain at Gosford and other Central Coast locations such as Wyong and Woy Woy. “Some longer hearings will be transferred to Newcastle. “If parties cannot travel they can ask to appear via phone hearing. “NCAT has reviewed services at Gosford and there is nothing to indicate increased adjournments or confusion between the courthouse and NCAT. “However, NCAT will continue to monitor the situation to ensure no issues arise.