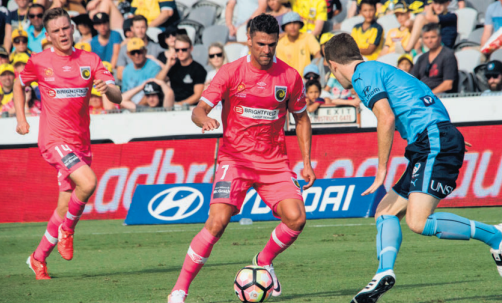 The Central Coat Mariners were denied a precious point against league leaders Sydney FC, thanks to an offside goal by Sydney FC substitute, David Carney, to give Sydney FC a three goal to two win at Central Coast Stadium on Sunday, January 8.

The Mariners, who were hoping to gain their first win in six rounds, put in a valiant effort against Sydney FC and were unlucky not to get all three points. The Mariners were on the defensive during the first half, with Paul Izzo pulling off a variety of saves to prevent Sydney FC from breaking the deadlock. However, a defensive lapse at the end of the first half cost the Mariners, as Bobo fl icked the ball over Scott Galloway to volley the ball in the bottom corner of the net, leaving Paul Izzo motionless. In his post-match interview, a relaxed Paul Okon said momentary lapses of concentration and errors continued to be a problem for his young side.

The second half got off to an entertaining start but Sydney FC managed to score five minutes after the second half kick-off thanks to another goal from the Brazilian striker Bobo. The Mariners were determined to get on the scoresheet, and thanks to a set piece, Roy O Donavon was able to rise high among the rest with a header to give the Mariners some hope of a comeback. Connor Pain had an immediate impact off the bench, winning a penalty after being fouled inside the box. Fabio Ferreira stood up to take the penalty, only to misfire and kick the ball into the Yellow Army support. After the game, Paul Okon commented that the Mariners had not had to take many spot kicks this season but that he believed the team’s penalty taker was Roy O’Donovan and was at a loss to explain why Ferriera took the shot.

Fabio was keen to make up for his mistake, and put in a cross which caused a scuffle in the Sydney FC box, with the ball landing straight to the boot of Scott Galloway who slotted home the Mariners equaliser. On the sideline, Okon tried to calm down his triumphant youngsters and keep them focused. Barely a minute later, David Carney headed home a contentious winner, with replays showing he was offside. The Mariners are the only team to have scored more than one goal against Sydney FC this season, and were unfortunate to drop points. The Mariners now sit in ninth place with 10 points. Former Central Coast Mariners Coach, now Sydney FC’s Head Coach, Graham Arnold, said: “I am sure Paul would like to see the Mariners play like that every week, and if they did, they would cause problems for quite a few A-League sides.”

Poscoliero keen to get back on the field against Perth Glory