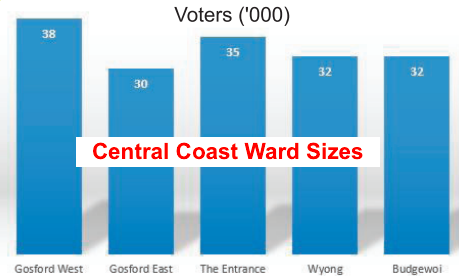 Many questions remain unanswered about the first election of the new Central Coast Council, now due in less than nine months.

It is known that the new LGA has been divided into five wards, each with three Councillors. According to correspondence from the NSW Office of Local Government’s manager of Council Governance, Mr John Davies, the merged Council was divided into wards because one of the former Councils, Wyong, already had wards. An initial analysis of the five wards that make up the new Central Coast local government area has raised questions about the composition of the Gosford West and Gosford East wards.

Based on two-partypreferred voting patterns from the July 2016 Federal Election, the Gosford West Ward would narrowly favour Australian Labor Party candidates. However, Gosford West is peculiarly large when compared with the other wards, both geographically and in terms of voter numbers. Dr Van Davy, who is a resident of Pearl Beach and ran in the Federal election as an independent candidate in the seat of Robertson, agreed to analyse the composition of the new Council’s wards for Coast Community News. He has declared that he will not be a candidate in the September Central Coast Council election. Dr Davy said the division of voters between the Gosford West and Gosford East wards was a “stand out oddity” that “begged explanation”.

The Gosford West ward, according to the NSW Government’s Stronger Councils website, encompasses the former Gosford local government area west of the Pacific Motorway as well as Kariong, East Gosford, Gosford CBD, West Gosford and all other residents between the western edges of Brisbane Water and Broken Bay, including the entire Woy Woy Peninsula from Booker Bay to Patonga as well as Hawkesbury River communities such as Mooney Mooney. According to Dr Davy’s analysis, the ward includes 38,000 voters as opposed to only 30,000 in neighbouring Gosford East. “Of the fi ve wards, it appears the Liberals have a strong advantage in Gosford East, Labor a strong advantage in Budgewoi, with the remaining three wards a small two to three per cent leaning to Labor,” Dr Davy said. “Gosford East ward is solidly and safely Liberal but has been constructed to be oddly small and is kept small with an extraordinarily irregular geometry to the electoral map which places, counter-intuitively, the Gosford city area and East Gosford area in the Gosford West ward,” he said.

“If this oddity was evened out, one would expect Gosford West to drop to around 34,000 and Gosford East ward to rise to around the same figure. “This particular issue requires close examination because, on the face of it, the result looks very odd. “It could be argued it has been done deliberately to place more Liberal voters in Gosford West ward thus making that ward a ‘swing’ ward rather than a solid Labor ward, which it would otherwise be. “Everything about this is odd – the size of the voting population, the counter-intuitive shape of the electoral map, the placement of the CBD in a ward with vast areas of National Park, State Forest, agriculture and mining,” Dr Davy said. According to the NSW Office of Local Government’s John Davies, the Local Government Act 1993 requires that the number of electors in each ward must not vary by more than 10 per cent.

The estimated 8,000 variation between Gosford East and Gosford West, if correct, would be greater than 10 per cent. Coast Community News sent questions to the offi ce of the NSW Minister for Local Government, Mr Paul Toole, asking how the Government determined the ward boundaries. Mr Toole’s offi ce sent the following statement in response: “New Council ward boundaries were authorised by the NSW Electoral Commission to ensure they complied with the 10 per cent variance rule. “In some instances major roads, residential roads, railways or parks were used as the boundaries for the wards to ensure the 10 per cent variance rule was met,” the statement from Mr Toole said. The Minister contends the new wards range in voters on the electoral roll from 48,400 to 49,500. The Minister’s Offi ce then referred Coast Community News back to the NSW Electoral Commission for information about what data it used. The Commission said it used the NSW electoral roll and geo-spatial analysis tools to assess and review the number of voters in each ward. “The wards proposed for the Central Coast Council met this requirement at the time of the review.”

According to Mr Davies, “The final number of electors in each ward will not be known until after the roll closing date, 40 days before the election”. The number of councillors to be elected in each ward will be three to make up the total of 15 councillors across the Central Coast, which is one of the largest local government areas in Australia. According to the Stronger Councils website, candidates will not have to live in the ward to qualify to stand as a Central Coast Councillor in that ward. Coast Community News has asked the Liberal Party, ALP and The Greens to provide information about when and how they will be selecting candidates for the September Central Coast Council election. Independent candidates are also entitled to run for the new Central Coast Council.

According to the NSW Office of Local Government, “anyone who is entitled to vote at council elections in NSW is also eligible to stand for election as a councillor. Under the NSW Local Government Act, the fi rst elections of all new councils are to be conducted by the NSW Electoral Commission. Assuming the election goes ahead on September 9, residents who qualify to vote will have until July 31 to register with the Commission so that they are on the electoral roll. Nominations for Councillors open on the same date that the Roll is closed, likely to be July 31. Nominations close 40 days prior to the election, likely to be August 9. According to Mr Davies, the proportional counting system will be used in the election, but the quota for each ward can’t be calculated until the number of voters is known, which will be after nomination day.

Statements made in this article are based on an analysis of two party preferred voting patterns from every polling booth in each ward in the July 2016 Federal election. Figures are approximate and are based on publicly available information. It must also be acknowledged that voters may behave differently in a Federal or State election to how they would behave in a local government election.