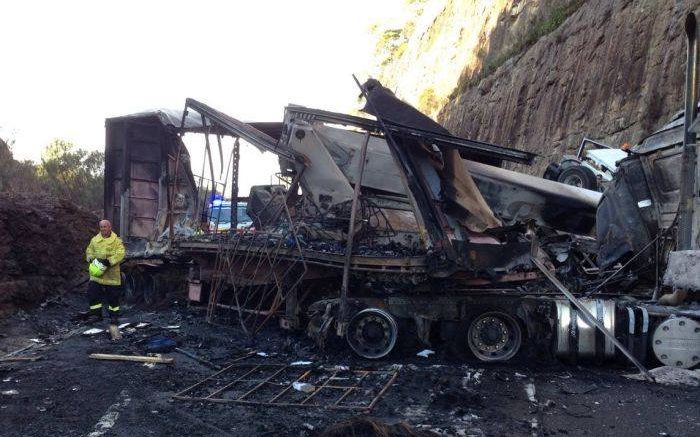 The wreck that blocked the M1 all day. photo via ABC Central Coast FaceBook

The Member for Terrigal, Mr Adam Crouch, in association with NSW Roads Minister, Ms Melinda Pavey, will be putting a contraflow in place on the M1 motorway for the northbound traffic peak today, Monday, January 31.
The contraflow will be put in place in response to an earlier accident between a b-double truck and a crane, both of which were travelling in northbound lanes when the collision occurred at around 4am this morning.
The accident resulted in a fire which “fused” the two vehicles together.
The road surface has incurred serious damage that will have to be repaired overnight.
As a result, Mr Crouch announced that a contraflow would be in place to divert northbound traffic onto southbound lanes prior to the accident site.
Traffic will then re-enter the northbound lanes of the motorway at a suitable juncture north of the site.
Mr Crouch said he also encouraged Central Coast commuters to delay their departure from Sydney for as long as possible or to consider leaving their vehicles in the city and travelling home by train.
“It is very hot today so we are encouraging people to delay their journeys.
“RMS workers will be on hand with water if the traffic does back up,” he said.