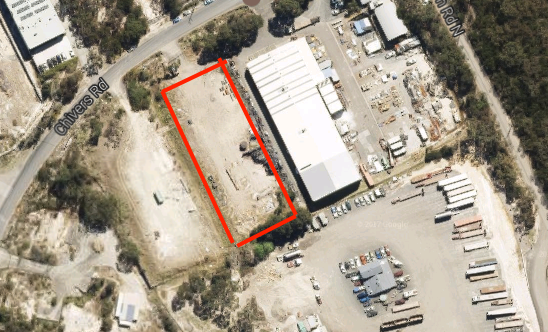 A proposal to develop a vacant lot in Somersby into a building material recycling yard is before Central Coast Council.

The vacant 4,001 square metres industrial site is legally known as Lot 422 DP 1098005 with the street address of 66 Chivers Rd, Somersby. The allotment has a width of 39 metres and a depth of 100 metres that is relatively fl at and clear of vegetation and structures. The site is located within the Somersby Industrial Park and obtains direct vehicular access to Chivers Rd, with access to all the required utilities for industrial activities.

The surrounding development entails industrial development with pockets of remnant bushland on vacant lots that are located within close proximity of the M1 Freeway. The proposed development is for the establishment of a building material recycling yard with operations wholly contained within the cleared site zoned IN1 General Industrial under the Gosford LEP 2014. The proposal falls under the definition of general industry and as such the proposal is permitted with development consent within this zone.

The facility would include the establishment of sorting areas on the site that would allow the owner of Bliss Demolition to retrieve building materials that have been obtained from the demolition and removal of residential developments, primarily single dwelling houses and ancillary structures, and sort them on site. The proposed development has been designed as such that materials delivered to the site are recycled. Selected building materials would be stored in separated stockpiles until required for resale to other recyclers specialising in certain material recycling such as Sims Metal Management or OneSteel. Sorting areas would be delineated by their type, with reusable building materials to be sorted and stored for re-use for domestic scale construction.

According to the Statement of Environmental Effects supplied with the Development Application, the proposed recycling yard would provide an effective means of reducing the total waste stream to landfill through recovery and recycling of waste from building construction and reconstruction projects in the Central Coast Local Government Area. The Statement of Environmental Effects (SEE) also stated that: “The proposal would not result in any adverse environmental, amenity, social, or economic impacts to the site and surrounding area, and on the contrary, would uplift the surrounding street network, and also coincided with both the Central Coast Regional Plan 2036 and the EPA Act.

“The operations are considered rudimentary as far as resource recycling facilities can be operated. “The recycling operation would not include special waste, liquid, hazardous, general solid waste (nonputrescible) or chemical waste as defined by the EPA publication – ‘Waste Classification Guidelines Part 1: Classifying waste’.” The SEE concluded that this proposal met all planning strategies and controls applicable to the site and that it also had minimal detrimental impact on the environment or amenity of the site. The SEE stated positive social and economic benefits for the area if the proposal was approved and recommended council green light the recycling facility.