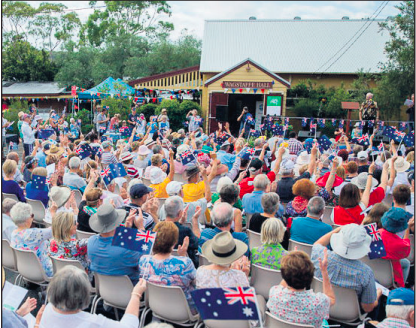 Wagstaffe and Woy Woy will be the two local locations for the official Central Coast Council’s Australia Day celebrations on Thursday, January 26. Celebrations will start on the waterfront at

Wagstaffe from 8am including a flag-raising ceremony and other entertainment through to 10:30am. A community breakfast will be available from 9am.

Woy Woy’s Australia Day celebrations will kick off at 2pm and run through until 9:30pm on the waterfront. Attractions will include food and market stalls, entertainment, and children’s activities. After dark the traditional fi reworks will be simulcast to a soundtrack broadcast by a local radio station.  Celebrations at Pearl Beach

The annual Australia Day celebrations at Pearl Beach will be held on the beachfront on Thursday, January 26. The celebrations will commence at 8am with beach races. Participants will be able to register from 7.30am. Other attractions include a sausage sizzle, refreshments, fun fair, speeches and the Gosford City Brass Band to entertain.

The Entrance will be a hive of activity, featuring amusement rides, an ice cream eating competition, a performance from Mental as Anything and finish with a fireworks display.  The Entrance Australia Day at Memorial Park, will run from 12pm – 9pm.