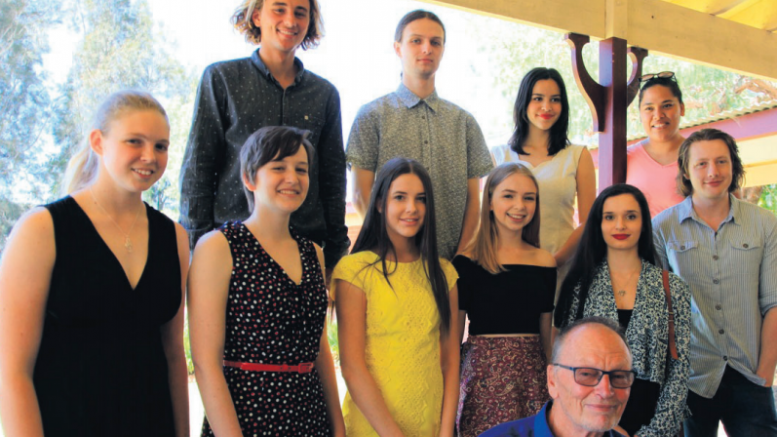 Shakespearean Actor and Director, and Chairman of the Bouddi Foundation for the Arts, Mr John Bell, recently announced the awarding of $24,500 in grants to 13 talented young artists from the Central Coast.

Mr Bell was speaking after a special awards ceremony at Wagstaffe Hall which preceded a fundraising concert featuring the host of the popular ABC Australia All Over radio program, Ian ‘Macca’ Mcnamara and his special guest, Melinda Schneider. “The amount of talent among young artists on the Central Coast is extraordinary,” Mr Bell said. “The Central Coast can be very proud of them.” This is the fi fth year that the Bouddi Foundation for the Arts has announced its grants program. In that time, over 40 grants totalling $96,500 have been made to young artists under 25. “Not only is the depth of talent remarkable, but the range of artistic pursuits undertaken by these young people is both exciting and inspiring,” he said.

We have been able to provide support to dancers, both contemporary and classical, musicians, a writer and, in the visual arts, a photographer, painters and a ceramicist. “The Foundation has adopted a structured approach to its grants program with the aim of both developing the talent of young artists and then supporting them as they consolidate their accomplishments into careers. “It is most gratifying to see that after fi ve years this approach is working well.” The 2016 Bouddi Foundation for the Arts Grants in the Gosford City area were as follows. Jasmine Baric, aged 16 from Narara has been playing the violin for 10 years and will be using the grant for Diploma of Music Course fees and to travel to Melbourne for development with the Australian National Academy of Music orchestra. Kimberly Gilbert, from Erina, also aged 16, is a student at the Central Coast Grammar School where she studies cello, and also studies piano at the Central Coast Conservatorium, where she has earned the conservatorium’s most prestigious piano award.

Her grant will be used for travel to the US for one-on-one and masterclasses with the renowned international Steinway artist, Eugene Alcalay, and other performers at the University of Azusa, Los Angeles. Jacinta Janik from Kariong has been classically trained with the Australian Ballet and is now pursuing contemporary dance at NAISDA. Her grant will be used to attend summer and winter dance intensives overseas. Ms Janik said her goal was to travel the world in dance and that she had been proud to learn more about her Aboriginal background which was shunned by her peers when she was growing up. “I am now proud to dance for my culture as well as being accepted into NAISDA,” she said.

Jessica Pearson, also aged 16, from Point Clare, is passionate about performing musical theatre. She is studying dance, drama and voice at Newtown School for the Performing Arts, and her grant will be used for tuition, workshops and equipment. Locally, she is a Classique Dance student and is undertaking vocal tuition at Erina’s Elite Vocals Academy. Toby Wells, 17 years old, from Holgate, is a student at Narara Valley High School. He is also a seasoned song writer and singer whose ambition is to study contemporary music and become a professional musician. The grant will be used to buy quality equipment to support him in his busy performing and recording life. “My ultimate goal is to sustain a career out of writing, playing and recording my music,” Toby said.

“I hope to make music that people can relate to and connect with; I want to make a difference to someone, anyone through my songs. “The high point for me so far was when my band, Stranger Than Paradise, opened for Thirsty Merc on their 2016 Good Life tour. “The experience cemented in my mind that this was what I really want to do.” Amelia Lynch from Green Point, is 19 and took up pottery in 2012 after achieving notable success in textile arts and related genres. Now studying at the National Art School for a Bachelor of Fine Arts, her grant will be used for fees, workshops and materials. Harley Lynch, also from Green Point, aged 19, is enrolled in National Art School concentrating on photography and digital imaging.

He will be using his grant to invest in upgraded photographic equipment. David Ramsden, aged 25 from Terrigal, graduated with a Bachelor of Fine Arts (Hons) from UNSW. Now working in Terrigal as a visual artist, illustrator and portrait artist, he will use the grant to invest in art materials. Claire Welch, aged 17 from Bensville, has explored various art techniques including digital creativity, but fi nds traditional art practice more engaging and creatively satisfying. A student at the Central Coast Grammar School, her grant will be used for workshop and art courses at the National Art School. Claire said her goal was to fi nish her HSC and progress to study fi ne arts at a university level. “There is a wide world of art that I wish to explore; I’m thrilled to already have had contact with artists that love art,” she said. “I’ve worked really hard on my art in the last couple of years and it was amazing to receive such positive feedback and encouragement from the Bouddi Foundation and the panel that spoke with me. “The Bouddi foundation’s assistance will provide access to classes and materials that I would otherwise be without,” she said. Other award recipients came from the Woy Woy Peninsula and from Toukley.