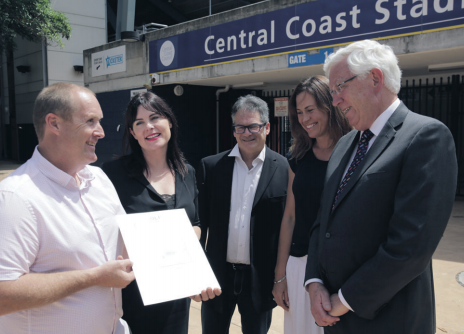 The Central Coast Sports Federation launched a Walk of Fame at Central Coast Stadium on Friday, November 25, with funding from the Stronger Communities Programme.

Construction of the walk has not commenced, but the launch was to celebrate securing up to $20,000 in funding needed to complete the project. Mr Sheldon Kidd said he had been working towards the project since 1998. “It’s been 20 years in the making, working alongside the Sports Federation to get this walk underway,” Mr Kidd said. “We have 20 plaques at the moment honouring people such as 1975 Sportsperson of the Year and Hall of Fame inductee, golfer Billy Dunk, and Vicki Roycroft, an equestrian who competed at three Olympic Games,” Mr Kidd said.

He said plans for another 40 plaques, extending the path even further, were in the works. “It will start at the stadium and make its way through Gosford CBD,” he said. Central Coast Council Administrator, Mr Ian Reynolds, said discussions on the direction of the route had been held and once plans were fi nalised, the aim was to have the walk constructed in 2017. “The route’s placement and construction are paramount to ensuring the Central Coast Sporting Walk of Fame best represents these amazing athletes and importantly, allows the Sports Federation to add new inductees and extend the walk over the coming years,” Mr Reynolds said. Wamberal resident and former Sydney Swift, Ms Alison Broadbent, attended the launch to show her support for the walk. Ms Broadbent was the 2004 sportsperson of the year and Hall of Fame inductee who represented Australia in 35 netball tests.

Sports Federation Chair, Mr Kerry Ruffels, said the walk was a fantastic way to pay tribute to this region’s most outstanding sportspeople. “The pathway to the stadium will feature our current Hall of Fame athletes and each individual plaque will remind us of their fabulous careers,” Mr Ruffels said. Member for Robertson, Ms Lucy Wicks, said with the funding and the support from Central Coast Council, the Walk of Fame could be brought to life. “This project is an exceptional way to honour our local heroes who have represented our community on a national and global stage,” Ms Wicks said.