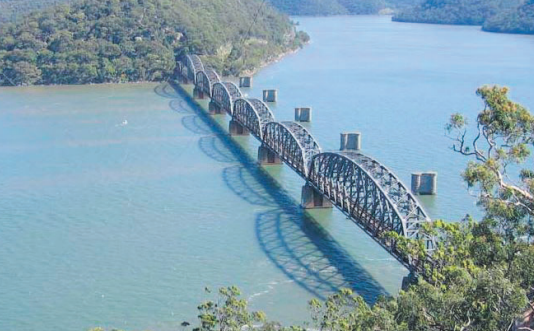 A Sydney Trains report, leaked to the Sydney metropolitan media, detailed the extent of the damage suffered by the Hawkesbury River Rail Bridge.

The report, released by the Sydney Morning Herald on December 2, revealed that “Inspection and diagnostic testing of the concrete elements yielded that the elements are subject to a range of defects including spalling, cracking and poor compaction”. “The only way the Central Coast community fi nds out about the state of the Hawkesbury River Rail Bridge is through leaked documents and freedom of information requests,” said NSW Shadow Minister for the Central Coast, Mr David Harris. “The NSW Government has been sitting on a report into the state of the rail bridge since July and has failed to tell the public about its contents.

“The safety of commuters should come first, not the Government’s attempts to keep themselves out of the headlines,” Mr Harris said. “According to the leaked report, load limits have been placed on freight trains using the bridge amidst fears that the rapidly deteriorating bridge can’t cope with the loads. “Despite sitting on the report since July this year, the Government hasn’t told the local community about the load limits and the current state of the bridge,” Mr Harris said. “Engineering reports have found cracking in the bridge’s concrete and defects in its steel frame; leading the Government to impose the freight limits on the rail bridge.” The crumbling state of the bridge was fi rst brought to light by NSW Labor last year after reports showed the concrete pylons were falling apart. Ms Kathy Smith, State Member for Gosford, said: “If we hadn’t blown the whistle on this situation, I fear the public would never have been made aware of these issues,” she said.