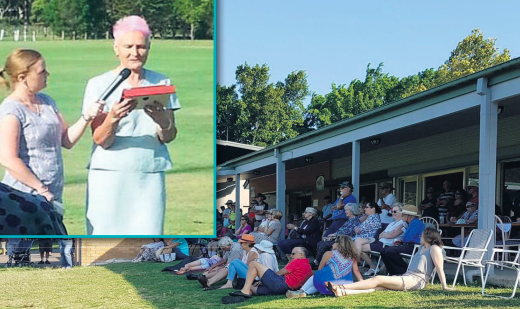 The former Wyong Council has been reported to the Independent Commission Against Corruption (ICAC) by the NSW Auditor General, Ms Margaret Crawford, for an investigation into possible corruption by the Council in pushing a site at Kangy Angy over Warnervale as the location for Transport for NSW’s new intercity rail maintenance facility.

The Office of the NSW Auditor General responded to a request from the State Member for The Entrance, Mr David Mehan, by reporting the matter to ICAC and undertaking to “look more closely at the site selection process”. That process resulted in the newly-formed Central Coast Council selling flood-prone land to Transport for NSW to build the new inter-city rail maintenance facility. The Kangy Angy site was not originally considered by Transport for NSW until it was suggested by the former Wyong Council who did not want the facility built on land it had earmarked for other purposes at Warnevale.

“Any signifi cant issues identified will be included in one of my annual reports to Parliament on transport, usually released in November or December each year,” Ms Crawford said. Mr Mehan said: “I welcome the Auditor General’s review into the selection process for the site of the facility and reporting any corrupt behaviour to ICAC. “I will be writing to the Secretary of Transport for NSW to ask for a review of the site selected,” Mr Mehan said.

“I will continue to fight for a sensible outcome to this matter which delivers the jobs the Coast needs on land better suited for the development,” he said. Meanwhile, the Federal Minister for the Environment and Energy, Mr Josh Frydenberg, ruled out the need for an Environmental Impact Study (EIS) to assess the impact of the proposed facility on the Kangy Angy habitat of the nationally-threatened Regent Honeyeater and Swift Parrot.

The residents of Kangy Angy have continued their campaign against the rail maintenance facility since the Wyong Council announced its intention to sell its Kangy Angy land to the NSW Government. They were recently involved in a rally organised by the Ourimbah Region Residents’ Association (ORRA), attended by around 150 concerned locals on December 11. If local, state and federal politicians wish to avoid “a Brexit or a Trump”, they need to start listening to groups like the Kangy Angy Residents’ Action Group (KARAG), according Ms Susan Zgraja who spoke on behalf of KARAG and received cheers from the crowd at the rally. “If Council, State and, indeed, Australia’s Prime Minister, Mr Malcolm Turnbull, wish to avoid a Brexit or a Trump, then they must begin to sincerely listen and acquiesce to local demands,” Ms Zgraja said.

“Groups like ours have had enough of political speak, weasel words and being patronised,” she said. “We live in a system where Councillors, planners and pollies automatically assume the status of expert, and follow the principle that we, the little people, don’t understand the complexities of issues. “I doubt if there is one action group that hasn’t been told the decision made is for the greater good. “We the little people recognise an inappropriately sized and positioned development when we see it. “We are not against development and socalled progress. “We are against decisions made through vested interest, ignoring costs to habitat, bad economic outcomes and the destruction of our quality of life.

“There is always, always, an acceptable alternative. “Our problem is to have these alternatives accepted. “Why should Kangy Angy accept the desecration of a protected flood plain, presenting many engineering problems making the project, not only an impending catastrophe, but hugely expensive, when there is a viable alternative sitting ready to go, with nothing like any of the problems exhibited at Kangy?

“Why is it always so difficult for sense to prevail? “When presented with arguments against these proposals, why is it not within the bounds of moral governance to accept that an error of judgement has been made, an acknowledgement that we the little people want alternative solutions and can often provide them. “It is precisely these scenarios that fuel Brexit and Trump responses. “You ignore us, fob us off and cheat us at your peril,” Ms Zgraja said.

Transport for NSW is yet to respond to residents who made submissions during the extra public consultation under the Environment Protection and Biodiversity Conservation Act 1999 (EPBC Act). The matter was referred to the Federal Department of Environment because the land is known habitat for the nationallyendangered Regent Honeyeater and the Swift Parrot.

The additional public consultation closed in November and Transport for NSW is now required to report to the Federal Department on all issues raised in submissions. “We have yet to receive a formal response from Transport for NSW regarding our submissions, despite the fact that we only had 30 days to lodge our submissions and we have been informed we now won’t hear from them until early 2017” said KARAG spokesperson, Ms Michelle Nicholson.

“We are yet to hear how they will adequately mitigate the noise, vibration and light spill from the 24 hour, sevenday heavy industrial project and how they will offset the removal of 3,984 Melaleuca Biconvexa listed as Vulnerable under both the Threatened Species Conservation Act and Environmental Protection and Biodiversity Conservation Act,” Ms Nicholson said. The Federal Member for Dobell, Ms Emma McBride wrote to the Federal Minister for the Environment and Energy, Mr Josh Frydenberg, raising her concerns about the development and requesting a full Environmental Impact Study (EIS).

In his response, Mr Frydenberg said: “The proposal is being assessed on the basis of preliminary documentation which is a standard assessment approach under the EPBC Act where the number and complexity of the impacts is low and locally confi ned. The Minister said all comments received would be taken into account as part of “the rigorous and robust analysis that supports the consideration of proposals under the EPBC Act.

“Once this assessment is complete, I or my delegate will decide whether or not the proposal should be approved and the conditions that may be required to avoid, mitigate or offset impacts on matters of national environmental signifi cance. “Should the proposal proceed, it will be subject to the Department of Environment and Energy’s active audit programme which aims to ensure that proposals are implemented as planned, and that there is a high degree of compliance with any conditions,” Mr Frydenberg said. However, the Minister did not address some of Ms McBride’s concerns.

“As the Federal Member of Parliament, I am concerned by the impact of this development on flora and fauna at the site,” she said. “I have met with residents who raised concerns about the assessment approach, which stipulates a full Environmental Impact Statement (EIS) is not required. “They also raise concerns about an unidentifi ed frog that may be present at the proposed development site.

“It is the residents’ preference that the assessment approach be by way of EIS. “I would appreciate your advice as to the possibility of the approach being amended, extending the requirement for an EIS at this site. “Other social and economic concerns with regard to this development have also been raised with me, and I am aware that these issues will be considered as part of the assessment process. “In light of this, I seek your decision on this assessment, rather than delegation to the Department, as I believe residents deserve reassurance that the most stringent oversight has been given to this proposal,” Ms McBride said.