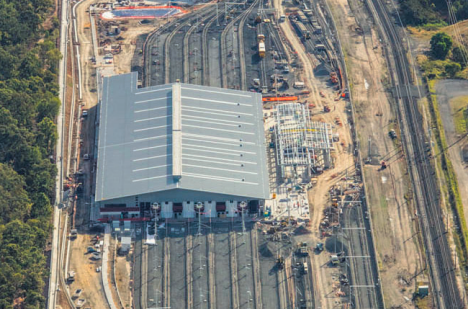 While basic questions go unanswered, the Brisbane train maintenance facility (pictured) is similar to that proposed for Kangy Angy

The NSW Auditor General, Ms Margaret Crawford, has been called on to investigate dealings surrounding the selection of land in Kangy Angy for the location of the Intercity Fleet Train Maintenance Facility.

State Member for The Entrance, Mr David Mehan, said he had written to the NSW Auditor-General requesting that the state’s chief auditor looks into the dealings surrounding the Kangy Angy site selection process. The proposed site in Kangy Angy did not originally appear on the list of 24 sites considered by NSW Government, and was only selected after being fl oated as an alternative by the former Wyong Council, who did not wish to approve the sale of the land at the preferred site in Warnervale. Former councillors, residents and community leaders have all questioned the legitimacy of the Kangy Angy decision citing concerns about inaccessible flood prone land, cost blow outs and environmental impacts.

The multi-criteria used to assess the original 24 sites contained key factors surrounding enabling works including impact on earthworks, and diversion of utilities, that was left out of the fi nal assessment given to Kangy Angy. “The Kangy Angy site would never have passed the government’s original criteria,” Mr Mehan said. “Moving the goal posts to fulfi l the wishes of a council that no longer exists is unacceptable. “New designs now include a heavy duty overpass bridge, that could cost upwards of $50 million, to access land that is completely unsuitable for the site,” he said. Mr Mehan said there had been a complete lack of transparency from the NSW Government around the maintenance facility. “I’ve written to the Auditor-General to investigate the processes and costings surrounding this project to shed some light on the Government’s dealings in this area,” he said. In his letter to Ms Crawford, Mr Mehan said: “I am concerned that the process used to select the preferred site for the facility, Kangy Angy, has been a poor process which will result in extra cost to the public and the environment.

“Better sites are located nearby. “It is of particular concern that the site selected should be an inaccessible, fl ood prone, and E2 and E3 zoned (Environmental Conservation and Management) piece of land, over accessible land zoned industrial. “Transport type projects are not permissible under the current zoning. “The selection process was improperly impacted with threats by Council’s then General Manager to use ‘political level’ infl uence to oppose the site originally chosen by TfNSW,” Mr Mehan said, quoting from an article published in the Newcastle Herald prior to the Wyong Council resolution to sell its Kangy Angy land to TfNSW. “The multi-criteria used to assess Kangy Angy against Warnervale [TfNSW’s original preferred site] is not the same as the criteria used to assess the other sites,” Mr Mehan’s letter said. “Eight criteria are used to assess the other sites while only seven were used to assess Kangy Angy.

“The criteria not used, enabling works, included impact on culverts, earthworks and diversion of utilities. “Since Kangy Angy will require major earthworks to bridge the railway line and raise the facility above the fl oodplain; impact existing culverts; and, require diversion of power lines; I suggest its inclusion would have resulted in Warnervale being found the better of the two. “In addition to the above, construction on the Kangy Angy site will prove extremely expensive because of: the quantity of imported fi ll required and its consolidation; the additional footings required on such fi lled ground for buildings, heavy engineering facilities and overhead wiring structures; and the huge overbridge structure (capable of heavy vehicle access) that will be required to access the site from Enterprise Dve over the Main North railway lines.

“It would not be inconceivable that these site-specifi c costs may exceed $30 to 40 million above the costs of building a similar facility on alternative land. “The additional costs and readiness to construct a bridge to access the maintenance site are particularly galling for local people given the two nearby railway crossings at Ourimbah are a narrow bridge which requires an upgrade and an underpass which regularly fl oods,” Mr Mehan’s letter said. According to the offi ce of the NSW Auditor General, Mr Mehan’s request has been acknowledged and he will receive a more detailed response within a couple of weeks. That response will indicate whether or not the matter will progress to an audit.