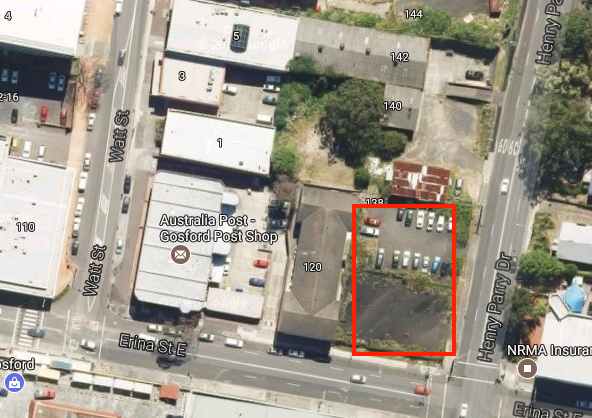 An application has been received by Central Coast Council to modify the consent for a 180-unit retail and shop top housing development on the corner of Erina St and Henry Parry Dve in Gosford.

A two-year consent was given by the Joint Regional Planning Panel in May 2015 for the $36.6 million development. The modifi cation would allow for the staged construction of the development. “Construction of the project is soon to commence,” according to a letter from Stephanie van Dissel, Senior Town Planner with ADW Johnson, acting on behalf of the applicant, AO Gosford Pty Ltd. “However, it has been discovered that numerous conditions within the consent do not allow for the issue of staged Construction and Occupation certificates,” Ms van Dissel said.

“Due to the size of the development and signifi cant funds required to build, it is requested that it now be staged,” she said. The applicant has requested that Council amend the consent so the development can occur over four stages. A site works stage would include erection of site fencing, demolition of existing buildings, levelling of the site and construction of driveway cross overs. A second basement/ podium stage would include basement level 1, ground fl oor including retail space and a podium level consisting of three units in the northern building. The development would then move to a third stage which would incorporate the construction of the North Tower, with 94 unites over levels two to 13. The fi nal South Tower stage would then see the construction of a podium level consisting of seven units and 76 units over levels two to 14.

Dancing fun for the over 50s