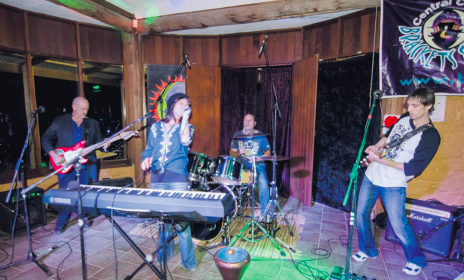 Mothership play on the mountain

Tyrell will be performing selected tracks from his debut EP, due for release in early 2017. The EP features traditional English and Celtic folk songs re-imagined into stomping, roots infused arrangements. Tyrell’s originals showcase social justice themes expressing experiences of love, loss, depression and triumph. Dave Stone is a folk rock artist and singer songwriter. Stone grew up on the Central Coast but has since gone on to take his music to the world.

He has represented Australia twice at the 2005 and 2010 world expos, performed at the JZ Jazz Festival in Shanghai, China, Japan’s Blues Festival and locally at the Kincumber Blues Festival. Stone has just returned home from a residency in Shanghai at the Cotton Club. The Cotton Club is one of China’s most well respected and longest running live music venues and has been providing top quality live music six nights a week for the last 19 years. Mothership Tribute Party Band specialise in Classic Rock, Rock ‘n’ Roll, Blues, Folk, Jazz, Funk, Reggae, Pop, and Soul. Mothership were founded in January 2012, by husband and wife team Scott and Catherine McLaren. The event is BYO everything but meals will be available on the night. Brackets South event takes place on top of Kincumba Mountain.

The community built venue is a mud brick and natural timber building which sits in a bushland reserve, with panoramic views of Brisbane Water and magnificent sunsets over the hills beyond. This venue is the birthplace of Brackets and Jam on the Central Coast and the community considers it as its spiritual home. The Mountain itself holds a strong signifi cance for the local Aboriginal community, and has been a long standing meeting place for Central Coast people. Entry fee applies on arrival.