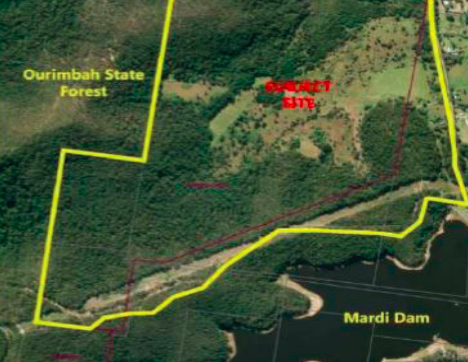 Locality plan for the proposed rezoning at Mardi Old Farm

At the October 26 ordinary Council meeting, Mr Reynolds resolved to support an amended planning proposal and request that NSW Planning agree that inconsistencies in relation to environmental protection zones, fl ood prone land and bushfi re protection be considered “of minor signifi cance”. Mr Reynolds resolved that the proposal sent to NSW Planning should amend minimum lot sizes from 500 square metres to 900 square metres. Central Coast Council will enter into a Voluntary Planning Agreement to establish the requirements the applicant will need to undertake before submitting a DA. The Administrator resolved that “Council consider appropriate notations on planning certifi cates informing future purchasers … of additional applicable development standards in relation to mine subsidence and acoustics.”

In 2004, the plan was denied by the (then) Department of Planning and Infrastructure on the basis it was inconsistent with the principles and objectives of the GosfordWyong Structure Plan (1975), Shaping the Central Coast (1999) and the Central Coast Regional Strategy (2006). The former Wyong Council resolved to support a new planning proposal to rezone the land in March 2013, according to a report to the October 26 meeting from Council’s Department of Environment and Planning. A gateway determination was issued in September 2013 and Wyong Council supported the preparation of a sitespecifi c Development Control Plan in 2014.

The report from staff said the proposal was consistent with the latest regional plan, Central Coast Regional Plan 2036. “The proposed zoning amendment is to be partnered with … WLEP 2013 provisions to facilitate and control development outcomes.” Those provisions, according to the report, include a minimum lot size exception…so 30 per cent of the area of any lots may be less than the minimum lot size, provided they are no less than 900 square metres in area; application of a Dwelling Density Map to restrict overall lot yield to 300 lots; application of an Urban Release Area Map which will apply Part 6 Urban Release Areas of Wyong LEP 2013 to any future development of the site; and may require contributions to be made for the provision of state public utility infrastructure. “A DCP amendment has been prepared and exhibited with the planning proposal. “A draft Voluntary Planning Agreement has been negotiated to ensure that the Proponent: establishes a 120 hectare Biobanking site in the Mardi locality; undertakes works to upgrade the Potters Gully and Mardi Dam West Fire Trails; provides a monetary contribution to Council to construct and/ or upgrade the Mardi Dam West Fire Trail where it is located on Council land; and, undertakes ongoing maintenance of the Potters Gully and Mardi Dam West Fire Trails, where they are on the Proponent’s Land.”

According to the report, the first time the proposal was placed on public exhibition, 118 submissions were received, including 108 community member objections. Amendments were made to the VPA to ensure land in the locality will be established as in perpetuity Biobank sites. The area proposed for conservation increased from 55 per cent to 75 per cent. The amended planning proposal was further exhibited for 31 days in 2016 and extended for 21 days. A further 86 submissions were received, including 60 objecting to the proposal and 26 letters of support. According to the comments in the report that respond to issues raised in submissions: “An Aboriginal Heritage Management Plan will have to be prepared for any future subdivision of the site.

“Additional detailed flood modelling will be required to be undertaken to support any future subdivision of the site. “The extent of the E2 Environmental Conservation zone has been extended and now applies to over 75 per cent of the site. “When combined with the requirement for 120 hectares of this land to be the subject of a biobanking agreement, this provides for extensive areas of environmental protection. “Submissions have raised concerns that the proposed rezoning and potential fi lling of fl ood prone land is inconsistent with … Flood Planning… and the Lower Wyong River Floodplain Development Plan. “The Lower Wyong River fl ood study identifi es that the site is affected by a 1 per cent Annual Exceedance Probability (AEP) event. “The DPI-Water have reiterated that they have no objection to the proposed rezoning, however activities on water front land may require additional approval.

“Concerns regarding the capacity of Wyong Rd are being rectifi ed by works planned and currently being undertaken by the RMS.” Many submissions identifi ed the potential impact on the region’s water supply resulting from sewage overfl ow during the 1 per cent Annual Exceedance Probability (AEP) Event. Contamination of the Mardi Dam storage through groundwater was also raised as a concern. However, according to the report to Council: “The site is not located within the Drinking Water Catchment, nor the catchment for Mardi Dam. Any future development of the subject site will be required to be connected to Council’s reticulated sewerage system at the future developer’s expense,” the feedback on submissions said.