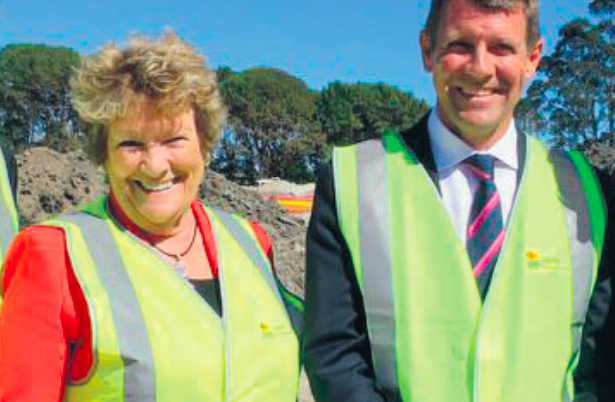 From left: Jillian Skinner NSW Minister for Health with Premier Mr Mike Baird at the announcement of the Northern Beaches Hospital in 2014

The Wyong community will get a bigger and better hospital as a result of the NSW Government’s proposed public private partnership, according to the NSW Minister for Health, Ms Jillian Skinner.

Ms Skinner told the Wyong Regional Chronicle that the NSW Government would still spend its promised $200 million on the redevelopment of Wyong Hospital. “I would expect a private sector partner to add more money to the $200 million, but our commitment has not changed,” Ms Skinner said.

“Having a private partner means the community can get a lot more, including extra services, a bigger hospital, and more staff,” she said. Ms Skinner said she expected a redeveloped Wyong Hospital to become a major maternity hospital if the privatesector partnership went ahead. The existing Wyong Hospital currently has limited birthing services. Ms Skinner said it would take at least a year to work through the Expression of Interest and Tender processes necessary to fi nd a suitable private sector partner.

The Minister for Health would not name the organisations that had submitted expressions of interest, but confi rmed they had to have a proven track record of running hospitals in Australia to qualify. “We got numerous known private hospital operators and nearly all of the not-for-profi t operators,” she said.

NSW Health will spend the next four to five months working with the operators that submitted expressions of interest to give them a clearer understanding of the commitments that would be expected of them if they were to participate in the tender process. “The tender specifi cations will include a clinical services plan for the district, and the operator would be obliged to meet those requirements, but they don’t have to stop there. “There is no limit to what they can bid,” Ms Skinner said. She said opening up the development and operation of the hospital to a competitive tender process meant two parties could out-bid each other by committing to the delivery of additional services.

“The Northern Beaches Hospital ended up with a Cardiac Catheterisation Lab that was not in the original tender plan,” she said. Ms Skinner referred to the Northern Beaches Hospital, constructed by Healthescope, as the model for the publicprivate-partnership being proposed at Wyong. She said she urged people to take a drive past the new hospital on Sydney’s Northern Beaches. “It is a beautiful hospital, much better than anything you would get out of public funding,” Ms Skinner said. The Minister said she could assure public patients that they would be cared for exactly as if they were in a public hospital. “The government will pay for public patient care,” she said.

“At the end of the contract (20 years in the case of the Northern Beaches Hospital), the partner will have the option to continue, but if they don’t, the hospital returns to public ownership,” she said. Ms Skinner said that would be the case irrespective of the level of “value adding” the private operator had done on site. The for-profi t and not-for-profi t operators that submitted expressions of interest will be required to meet minimum requirements for documentation, legal arrangement and fi nancials before they are allowed to tender, as the fi ne detail required in the tender process could cost any potential partner millions of dollars.

When asked if Health NSW would make the detail of the contract for the partnership available for public scrutiny, Ms Skinner said: “The public can already have a look at the details of the Northern Beaches Hospital arrangement and I can tell you that it will be saving tax payers $1.5 billion over 20 years,” she said. Ms Skinner argued that a partnership with the private sector would result in more jobs, not less, and that the contract could ensure conditions of employment, including superannuation, would be carried forward.

“When we announced we were seeking expressions of interest for a series of sites, we said we would not go ahead if it was of no benefi t to the community and the tax payer. and we have already walked away from one property,” she said. Ms Skinner said claims that free public health care would not be available at a redeveloped Wyong Hospital, or that there would be no emergency department, were “rubbish led by the unions. “I met with the unions and they told me that they had a philosophical problem with private sector involvement,” she said.

Why I returned to politics – Chris Holstein

Promised and then deleted park may yet be delivered