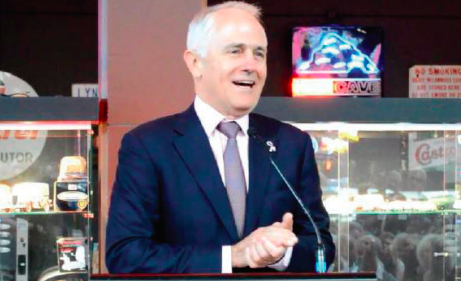 The Prime Minister celebrated his birthday in Gosford's car museum.

The Gosford Classic Car Museum was the venue for Prime Minister, Mr Malcolm Turnbull’s, 62nd birthday celebrations, on the evening of Monday, October 24.

“We were honoured to host the Prime Minister, on his 62nd birthday, at the Gosford Classic Car Museum,” said Member for Robertson, Ms Lucy Wicks. “The event was a fantastic opportunity for myself and Karen McNamara to say thank you to the hard-working campaign volunteers,” Ms Wicks said. “Part of the event was a moving performance from Fletcher Pilon, as well as a speech from Jilly Pilon, who spoke about the strength of the Central Coast Community and our Banjo’s Skatepark commitment,” she said. Fletcher Pilon’s younger brother, Banjo Pilon, was killed in a car accident at Wamberal in 2015. “The Prime Minister also enjoyed viewing the extraordinary array of cars, including a Wolseley purchased by Dame Pattie Menzies, and an Alvis that appeared in the famous John Le Carre novels,” Ms Wicks said. “The thank you event was hosted in a world class venue on the Central Coast, a region that the Turnbull Government is working to transform into one that is known for its world class excellence,” she said.