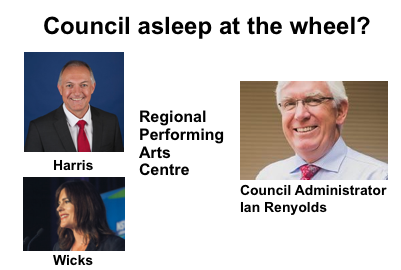 Council being urged to get moving on RPAC

Local Federal and State politicians, of all stripes, are now saying, unequivocally, that it is time for the Central Coast Council to deliver a regional performing arts centre for the Gosford Community.

They are also questioning whether the new Council’s lack of momentum on the revitalisation of Gosford’s CBD is also jeopardising developments that are already in the pipeline. Federal Member for Robertson, Ms Lucy Wicks, confi rmed that she has written to Central Coast Council seeking an update on the status of major projects within Gosford, including the Regional Performing Arts Centre. “We are waiting for a response,” she said. “We have all been promised a performing arts centre for years, and now that we have the funding, we need council to get on with the job, announce the location, tell us what it is going to look like and when it is going to be built,” she said.

“I do have hope that the combined, newly-formed Central Coast Council is doing a great job, that we are tackling many of the issues, and I share the frustration with Central Coast residents that, after decades of promises, decades of councils saying they would build a performing arts centre, they couldn’t afford, on land they didn’t even own, that now we have a council with the funding, it will be built. “We all want to enjoy it.” Ms Wicks said she was not concerned about the location of the centre, providing the allocated funding was utilised. “Whether it goes 50 metres one way or 50 metres the other, I think we just need to get on and see the performing arts centre and world class performing arts.

“It is up to council, it has always been up to council, to determine the location of the performing arts centre. “There has been a grant awarded from the Federal Government for $10 million, and from the State Government for $12 million, including $2 million for the conservatorium extension, and council themselves have committed $10 million, so there is $30 million to build a Performing Arts Centre.” The NSW Shadow Minister for the Central Coast, Mr David Harris has called the Regional Performing Arts Centre, or lack thereof, “a complete debacle”. “If you look at the regional plan, it talks about a performing arts and cultural precinct, so the NSW Government has to come out and put out what it is actually doing.

“The Our City Our Destiny document outlined exactly what the precincts are, they need to, as a matter of priority, either masterplan that area, or otherwise we are going to have fi ght after fi ght. “I have been told recently that the banks have put a red mark against Gosford’s name again. “Because of all the uncertainty it is harder to get fi nance. “That was the case, then they lifted it, and now, I have been told, once again, that developers have to have 85 per cent of a project presold before a bank will look at it. “That could mean the two big developments that got DAs approved that were announced with great fanfare won’t be going anywhere. “The NSW Government should have gone into partnership with one of those developers in terms of becoming an anchor tenant which would have made at least one of those developments viable,” Mr Harris said. “If they had gazetted the Local Environment Plan for the waterfront properly, Gosford would be moving ahead.

“We spent nearly five years, and two years of public consultation, to get the Our City Our Destiny plan, and it just beggars belief that seven years later, we have got lots of the holes in the ground and nothing to show for it.” On Monday, October 24, Central Coast Council Administrator, Mr Ian Reynolds, said the regional performing arts centre for Gosford was “not off the agenda”. “I have now been here for fi ve and a half months and I could number many days when this issue has been raised,” Mr Reynolds said. “In fact, I discussed it with representatives from the state government in the past week or so,” he said. “I am keen to make progress on the matter while I am here.

“We are still looking at locations within the CBD,” he said. In relation to pending Native Title and Land Titles claims over vacant crown land on the waterfront, Mr Reynolds said: “The Darkinjung group is clearly the largest private land holder in the Central Coast area, so we are involved in discussions with them on a range of sites regarding title.” Mr Reynolds confi rmed that $1.5 million was included in the 2016-17 operational plan which will be spent on detailed design work for the long-promised Gosford Regional Library. “When you are talking operational funds, that indicates that the thing is underway. “The designs for the library would lead to the production of a DA,” he said. In terms of whether operational funds were available in the current financial year for the performing arts centre, Mr Reynolds said: “We are not to that stage with the RPAC”.

Promised air conditioning for schools delayed until after June 2020