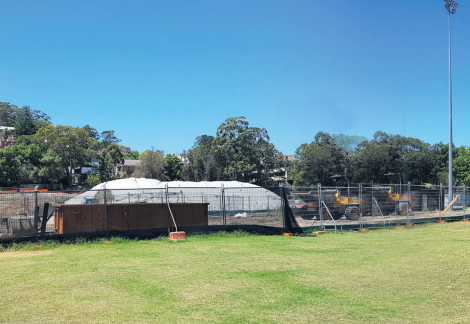 Senator Deborah O’Neill has slammed plans to build an access road for the Australian Tax Office through the middle of the park on Gosford’s Waterfront.

Senator O’Neill said: “Ms Wicks’ refusal to listen, and the imposition of the tax offi ce, were bad enough. “Now it is clear that she is also supporting an access road to the ATO that rips through the green space where the community gathers and stays fi t,” she said. “How out-of-touch can Ms Wicks get? “The community doesn’t want Ms Wicks’ big grey bunker of bureaucracy on our waterfront, and we don’t want Lucy’s Lane through our park. “The proposed road, which will be used for access in and out of the ATO, is proposed to take up 4,800 square metres of the Central Coast Leagues Club Park.

“Ms Wicks dismissed any suggestion of working with the community to relocate the ATO site after Senator O’Neill published an open letter urging her to work in the spirit of bipartisanship, with the community, to reconsider the development. “Day after day, Ms Wicks’ increasing arrogance shows that she is out of touch and doesn’t intend to represent the view of her constituents,” Senator O’Neill said. “The community have long said they want to get rid of Dane Dve because it interrupts pedestrian access to the Brisbane Water. “Lucy Wicks hasn’t heard that and now wants to put another road through the green space we have left. “She seems determined to wreck any effort to genuinely revitalise the Gosford Waterfront for the community and grow longterm local jobs. “Ms Wicks just doesn’t get it.

“Don’t build the road in our park Lucy, don’t put the ATO where we should have a Regional Performing Arts Centre. “Put the ATO, the transferees and any jobs that fl ow, in the centre of the CBD. “Labor will fi ght for longterm revitalisation of Gosford and sensible development that puts real local jobs and the community fi rst.” The Central Coast Council has reported that temporary traffi c controls will remain in place along Georgiana Tce in Gosford until November 11, while the Council completes “essential sewer works”. “A section of Georgiana Tce, adjacent to the Baker St intersection, is temporarily closed to through traffi c,” the statement from Central Coast Council said. “Diversions utilising Dane Dve, Baker St, Donnison St, Mann St or Vaughan Ave are be required. “Access to both Baker and Mann St will remain available from Georgiana Tce for motorists entering adjacent businesses and properties”, the statement said.