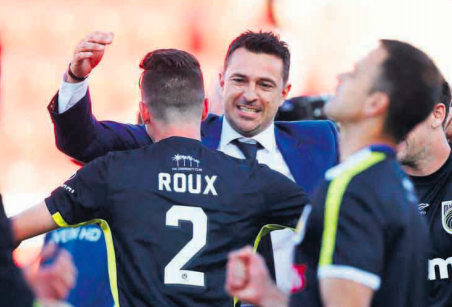 A stunning second half comeback, and a Connor Pain howitzer, has inspired Central Coast Mariners to their first win of the season, and their first win in the A-League in 281 days, beating Adelaide United 2-1 on November 6.

A Sergi Guardiola penalty had the Reds 1-0 up at the break at Coopers Stadium, Adelaide, before the Mariners launched their fi ghtback. First Roy O’Donovan levelled things up two minutes into the second half, before Pain produced an absolute screamer just before the hour mark, to complete the turnaround. Despite their best efforts and the return of playmaker Marcelo Carrusca for the last 30 minutes, Adelaide couldn’t fi nd an equaliser as they slumped to a fourth straight defeat in the Hyundai A-League.

With their win over Adelaide, the Mariners seem to have finally found their feet after a disastrous run in the 2015/2016 season. Fresh talent and an experienced new coach seem to have married together to bring the Mariners back into the 2017 season ready to fi re, going from strength to strength with their performances so far this year. The win comes off the back of the Club’s draw with the Western Sydney Wanderers which also showcased the Mariners penchant for a comeback, with Adam Berry fi nding the net for the equaliser the Mariners needed on his A-League debut. The Mariners’ next bout will be against Wellington Phoenix at GIO Stadium on November 12.