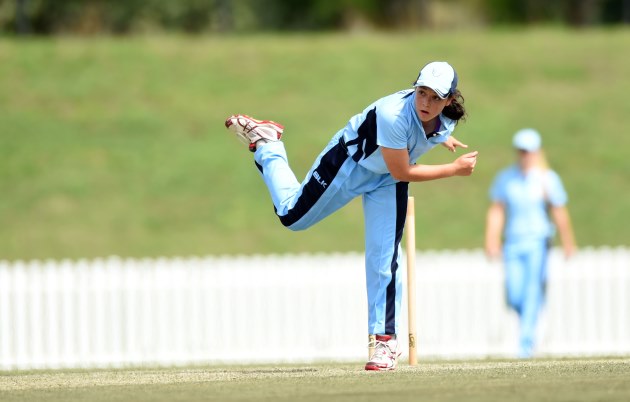 Cricketer, Lauren Smith from East Gosford, is the latest player to recommit to the Sixers as the club continues to announce its squad leading into the Rebel Women’s Big Bash League season.

Smith, who took six wickets during last season, with best bowling fi gures of 3/17, will again don the Magenta and look to further develop and grow as a player in the coming season. It was a big off season for the spinner, who made the trip to the UK to play with Lancashire throughout the Australian winter. This experience was the fi rst time the 20 year old had lived out of home, and on her return, she made the move to Sydney with some of her fellow NSW Breakers team mates. “I was pretty nervous and I wasn’t sure what I was in for,” said Smith of her time at Lancashire. “It was a big change. “It’s not the same sort of schedule as over here which is more structured, and it was tough at the start to adapt to the conditions.

“The experience taught me to be more independent and run my own training sessions, but it really helped me develop as a cricketer. “I’m excited and really looking forward to WBBL 02. “We came really close to winning the title last year, and I believe we have the team to go one better this year. “There’s always a good laugh around the squad and I’m excited to get back with them. “It’s been really good making the move to Sydney. “It’s allowed me to focus on my cricket and not spend so much time in traffi c,” Smith said. Head Coach, Ben Sawyer, said Smith’s experience over the winter was exciting for her development heading into the season. “Lauren is a very talented young cricketer with a big future in the game.

“She has had a big off season working on her skills in the UK during the winter, and I am excited to see her take everything that she has learnt being an overseas professional and putting it into practice during WBBL 02,” Mr Sawyer said. Smith’s signing comes off the back of last week’s major announcement of the re-signing of Ellyse Perry and Alyssa Healy, and Priceline Pharmacy coming on as principal partner for the coming season. These signings, along with former Australian International Lisa Sthalekar, young guns Emily Leys and Ashleigh Gardner, and young up and comer Haylee Hoffmeister, continues to build the roster. The Sixers start their WBBL 02 campaign on December 11, at North Sydney Oval against the Brisbane Heat.