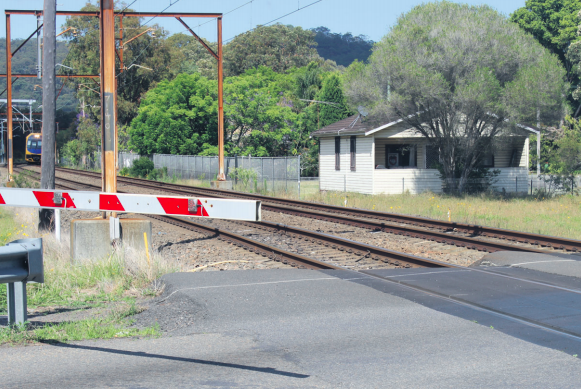 A northbound train approaches the level crossing at Woy Woy

Mr Holstein, now chair of the Central Coast Task Force, said the Government needed to justify “canning” the project just days after Premier Mike Baird declared the state had billions of dollars for infrastructure. “I am seeking to remind the NSW Government that when you make a commitment you honour it and here is a fi ne example of a commitment that was made that is not going to be honoured,” Mr Holstein said.

He said the level crossing at South Woy Woy was “one of the most used level railway crossings in NSW”. “For 40 years politicians, council and residents have talked of improving the road at Bulls Hill and removing the unsafe rail crossing,” he said. “There have been numerous times, due to incidents at the crossing, accidents on Woy Woy Rd or on Brisbane Water Dve that traffi c has been diverted and caused traffi c chaos on the Peninsula.” According to Mr Holstein, the idea of building a flyover was explored in the 1990s but the concept was rejected by politicians, council and residents. “In 2011, based on Gosford Council’s estimated costings, I sought funding from the incoming Liberal Government to address the issue with an expanded underpass at the base of Bulls Hill and was successful,” Mr Holstein said, referring to his campaign for the seat of Gosford in the 2011 NSW election.

He said he had tried to get the replacement of the crossing on the agenda during previous attempts to run for parliament but only succeeded in the 2011 campaign. The level crossing replacement was key to his 2011 election platform. Mr Holstein has been criticised for grossly under-estimating the cost of the project from the outset as progress drew to a standstill during the past year. Mr Holstein said State Members of Parliament were not responsible for the in-depth costing of major infrastructure projects. “We were in Opposition and could not get any proper costings from Railways or the department and Council’s costings said very clearly they would need to be reviewed and investigated along with the scope of the project,” he said.

“There was a review of costings after the 2011 election and the scope of the project was reduced, and we decided we would look at it in stages,” he said. “For the next fi ve years, studies were done, plans drawn, revised funding was approved and works commenced.” The recent announcement by the Minister for Roads, Maritime and Freight, Mr Duncan Gay, that no further funding would be available for the project, begged more questions than it answered, Mr Holstein said. “Is there still a need to improve the road and remove the rail crossing? “Why, after fi ve years of investigation and studies, which saw commencement, is it only now that the project is not worth it? “Why is the Peninsula Chamber of Commerce running the blame game rather than getting answers from the Government?

“Many more questions should be asked and answered but if the answer to the fi rst question is yes – that the improvements are needed and people’s safety is still a concern – then why doesn’t the Peninsula deserve it?” Mr Holstein asked. “Over two decades, the railway crossing has caused several incidents and has been dangerous. “Who from Council, our State Members or the Chamber of Commerce has been asking the Government for costings to justify its decision? “Is somebody playing with the fi gures and saying the full cost of the closure of the railway line at any given time is the cost of that one project?” Mr Holstein said he did not know why the project had been abandoned. “I don’t know if it is because of infl ated costs, or that the seat of Gosford is held by a member in Opposition.” Mr Holstein said the Member for Terrigal, Mr Adam Crouch, should also be asking questions of the Government.

“The majority of people, apart from Peninsula residents, that use that road are coming from the electorate of Terrigal,” he said. Mr Holstein said he believed the Peninsula Chamber of Commerce was also “throwing up a smoke screen” instead of working on solutions. “We have a State Member. I haven’t seen her. And then we have a Chamber of Commerce that wants to play a blame game. “Council should be asking the government questions but we haven’t got any elected representatives to do that because we are in administration. “This issue has got to be answered. “It hasn’t been answered in my mind, and the people who should be asking for answers are not doing so.”

Mr Holstein said that the former Member for Terrigal, Mr Chris Harcher, had acknowledged in 2011 that the railway crossing replacement would benefi t the people of the Terrigal electorate. In terms of whether funds put aside by the NSW Government for the abandoned rail crossing should be reallocated to other Peninsula projects, as suggested by the local Chamber of Commerce, Mr Holstein said: “I am sure the projects Matthew Wales talks about are worthy too, but why does he think the issue at the bottom of Bulls Hill has gone away?”

Local Liberal Members of Parliament were not answering Mr Holstein’s questions last week. Member for Terrigal Mr Adam Crouch said that, because Rawson Rd was not in his electorate, he would leave comment to the Parliamentary Secretary for the Central Coast, Mr Scot MacDonald.

A statement from Mr MacDonald’s office said: “The Minister has answered these questions at length. “We have nothing further to add.”