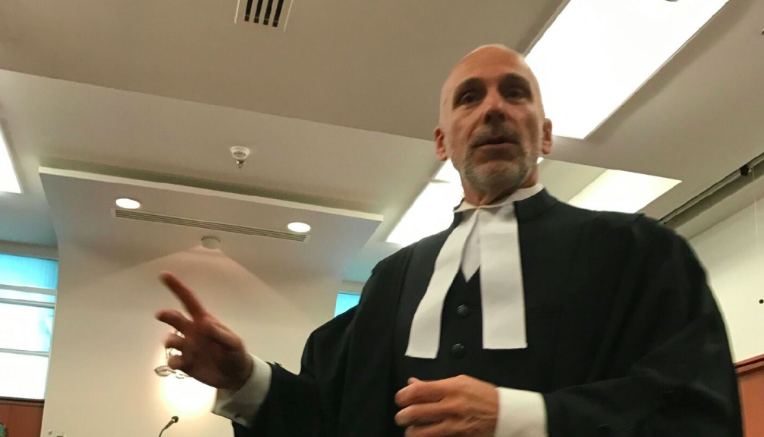 Matthew Fraser, Barrister for the GWA in action in the NSW Land and Environment Court today

GWA barrister, Matthew Fraser, resplendent in black silk suited to Melbourne Cup Day, took up all of day one in the court challenge in the NSW Land and Environment Court. The second day

More than 20 members of the Gosford Waterfront Alliance travelled to the Macquarie Street court complex to hear Mr Fraser deliver a series of technical and complex legal arguments for the case. Key arguments were around:

It was clear from the outset the case will be fairly contentious with interjections from opposing barrister, Sandra Duggan SC, making it clear DOMA is not going to concede any points in what will be a tough case. Justice Nicola Pain also sought a large number of clarifications in relation to car parking matter in particular.

After the lunch adjournment the court continued to hear more submissions from Mr Fraser on behalf of the Gosford Waterfront Alliance. Seven seperate arguments were put to Justice Pain, ranging from procedure to incomplete council officers reports and the necessary lawful activation of the ground floor.

The court persisted through the Melbourne Cup, with key protagonists blissfully unaware of the nation stopping event. Though a couple of the onlookers were seen following the race on their mobile phones in silent mode.

GWA President, Claire Braund, said from the court, that it was a testament to the committee, the GWA members and broader community of the Central Coast that the case had even made it to court.

“We have already had one or two small wins in the public interest along the way  – and at the very least we have demonstrated that businesses and local community members will not stand by and see poor decisions made without challenge.”

A number of GWA members resumed their seats for the mornings arguments.

The case continued at 10am on Wednesday with a continuation of arguments from Barrister Mr Fraser for the GWA on matters a precedent in previous cases. The arguments focused on the necessity of the JRPP to publish reasons for their decisions to approve the development.

The judge questioned the relevance of several of the precedent cases in what became a highly detailed series of legal arguments. After some

Senior Counsel Sandra Duggan acting for the developer DOMA commenced her defence of the application by GWA. Her defence challenged the validity of Mr Fraser’s arguments starting with a challenge involving the issue of car parking. She argued that the provision of car parking on a public road was allowed by the developer to meet their parking obligations.

Ms Duggan’s arguments on the matter of design excellence rotated around the building regulations relating to energy and materials. She did not concede that a lack of parking or full usage of the site precluded design excellence.

The judge was required to follow a series of arguments relating to previous judgements across the state in similar cases and in the higher Courts.

Morning tea adjournment was cancelled to try and speed up the expensive and expansive legal actions. GWA executive committee member Joy Cooper remarked “I’ve followed the arguments with great interest and it is clear that the GWA wins the moral argument though it is also clear that the legal argument is a much more difficult kettle of fish”

Toward the end of the session SC Duggan sprung a request for costs into her arguments, requesting the judge make a decision on this before the case was handed down. This action surprised the GWA and indeed the judge as it was only weeks ago that another judge awarded costs to the GWA as a legitimate public interest body.

Juctice Pain wrapped up the case and retired to consider her the arguments. Her decision will be made public at a some time in the future.

Meanwhile the construction continues on the site.