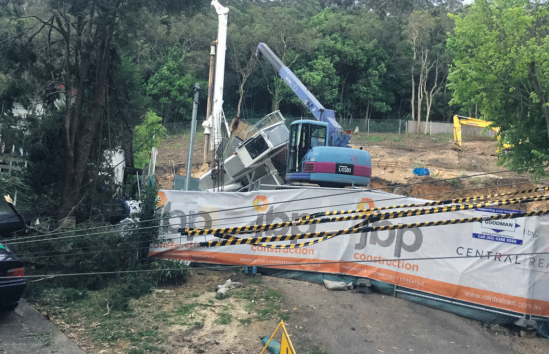 The collapsed 40 tonne crawler crane at 18 to 20 Kendall St, Gosford

An operator escaped without injury following a crane collapse at a major building site at 18 to 20 Kendall St, Gosford, on Monday, November 14.

Following the collapse, which damaged two cars, broke the cross-arms of power polls along the street and pulled down power lines, the crane driver remained trapped for some time in the cabin.

Emergency Services, including Police from the Brisbane Water Local Area Command, NSW Fire Service and Ambulance crews worked with an emergency crew from Ausgrid to isolate the mains power in that section of the network so the crane driver could be released from the cabin safely. According to Ausgrid, the power supply was interrupted to at least 600 homes and businesses, but most affected had their power restored within 90 minutes.

Around 50 homes and businesses were left without power overnight and an emergency Ausgrid crew continued working the following morning to restore their supply. Ausgrid reported that, by 3:00pm on Tuesday, November 15, 10 homes and businesses remained without power, but were expected to be reconnected to the network by around 4:00pm. Kendall St remained closed to all traffi c on Tuesday, November 15, and police advised motorists to avoid the area. SafeWork NSW confi rmed that it had sent an investigator to the site and would explore whether the accident was caused by any breach of work health and safety requirements.

SafeWork took charge of the site of the accident and were not able to move the crane away from the site until the morning of Wednesday, November 16. Parts of the crane may need to be sent away for further testing and work would not be able to recommence on the construction site until SafeWork NSW determined that the construction company was compliant with all SafeWork requirements. A statement from SafeWork NSW said: “Initial inquiries indicate that the 40 tonne crawler crane tipped over while slewing, bringing down power lines and damaging two motor vehicles before coming to rest on the road.

“No workers were injured in the incident. “SafeWork NSW has directed the principal contractor to stop work and arrange for the crane to be safely removed from the site so it can be tested by an independent engineer. “SafeWork NSW’s investigation remains ongoing.” The original development consent for the $17.1 million, 48-unit residential fl at building at 18 to 20 Kendall St was granted by Gosford Council in two parts in November 2014 and May 2015.

Two Section 96 amendments were subsequently lodged and approved to add six units and then make amendments to the drive way, parking, utility spaces and the internal planning of various units. A construction certifi cate was granted by private certifi er, City Plan Gosford Pty Ltd, for commencement of bulk earthworks, basement parking and demolition of existing structures on October 31, 2016.

Use public land for research and public benefit says Mayor