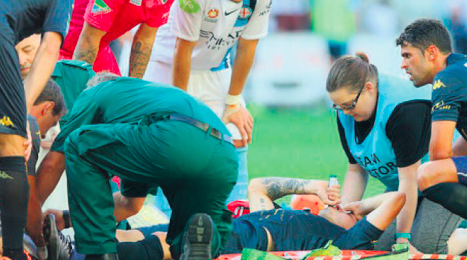 Central Coast Mariners’ right back, Storm Roux, has said he is looking forward to the A-League’s first home game against Brisbane Roar at Central Coast Stadium on Saturday, October 22.

Roux’s 2015-16 A-League season was cut short when he broke his fibula, damaged ligaments and dislocated his shoulder in a game against Melbourne City on January 30. He said the support of fans had helped him through lonely rehabilitation and gym sessions during his long, five month recovery. “I can go out there and show my appreciation to the fans that did actually really help me get through it,” Roux said. “All the messages I received and all the help; it really did help me get through those lonely rehab sessions and gym sessions, so I am very thankful,” he said. “Out for five months without touching a ball is hard to do and I definitely think it has made me stronger as a person too, coming back from that.

“As I said, I just want to put it all behind me now and look forward to playing football.” According to Roux, despite the Mariners’ four nil defeat by Sydney FC in the second round, the squad is confident that the wins will come. “We have shown great signs in the games we have played. “It was a tough loss against Sydney, you know, four-nil; I don’t think we quite deserved that score line, but we just need to iron out a few mistakes and just work on things that we are doing well, and hopefully the results will come.” Roux had nothing but praise for the club’s new coach, Paulo Okon. “Paulo has only had us for five weeks and that is a really short time to implement your playing style, but we are already showing great signs of it and the boys are all confident that the wins are going to come; we really believe that. “Obviously he has spent a lot of time in the national set up with the youth, with the under 20s and taking them over to under 20s World Cups and all that, so he has helped through a lot of youth and a lot of great players have come through his squad.

“You can tell the way he goes about his business, that he gets the best out of the young players in the team. “We’ve got such a young squad, it is only a positive for us, so hopefully the boys can grow under him and become great players.” Roux, as an experienced defender, said the squad’s back line is cognisant that it needs to get rid of defensive mistakes. “It’s tough after conceding so many goals last season, it is something we really need to work on, and every week in training, and every day in training, we are getting better and better at sorting out defensively as well as going forward,” Roux said. Brisbane Roar will also be coming to the Central Coast Stadium after a fournil loss at Newcastle against the Jets in round two. The round two losses for both clubs mean they are currently placed eighth (Mariners) and ninth (Roar) on the A-League table. The Mariners have scored three goals to the Roar’s one, but the Mariners have conceded seven to the Roar’s five. Although the two teams are currently neck-and-neck statistically and the Mariners would be expected to have the home side advantage, Brisbane Roar have been tipped to win the Central Coast Stadium clash that kicks off at 5:30pm.