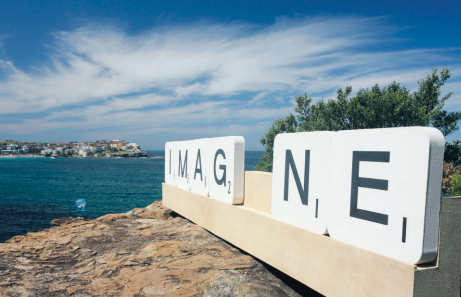 The original work before it was damaged by vandals

The public art installation that was set to call the Central Coast home on September 30, was vandalised before it was even opened to the public.

The internationally recognised interactive artwork titled “IMAG_NE” was supposed to put imaginations into overdrive as visitors to the sculpture pictured themselves as the missing piece. Based on the game of Scrabble, IMAG_NE featured large letter pieces which spelt out the word I-M-A-G-I-N-E, with a space where the second “I” would be, inviting the community to interact with the sculpture to complete the word. However, community interaction took a turn for the worst when an unknown vandal(s) destroyed the letter “M” in the artwork.

Created by Australian visual artist and creative producer, Emma Anna, the artwork originally exhibited at Bondi’s famous Sculpture by the Sea in 2008, and has since featured around the world, including at Denmark’s inaugural Sculpture by the Sea in 2009. Prior to the act of vandalism, Central Coast Council’s Administrator, Mr Ian Reynolds, said the moving sculpture was purchased in April 2016, and would have exhibited at a range of locations and popular destinations on the Coast. Also prior to the act, Mr Reynolds said Council was thrilled to present the sculpture to the community.

A Council spokesperson confi rmed that the artwork did not even survive until its offi cial unveiling with the sculpture confi rmed to be intact on the afternoon of September 28 and vandalised by the morning of September 29, one day before its offi cial unveiling. It is unclear at this time whether or not the sculpture will continue on its tour of the Coast or if it will continue its three month run at its current location on the Gosford Waterfront. The same spokesperson did confi rm that Council was in discussion with Emma Anna regarding the vandalism. The artwork was intended to act as a social media trend highlighting Council’s new rebranding campaign for the region, #thisisthelife. “Central Coast Council is incredibly disappointed at the vandalism that has occurred. “The police have been notifi ed and are investigating this incident,” Council’s Chief Executive Offi cer, Mr Rob Noble said.