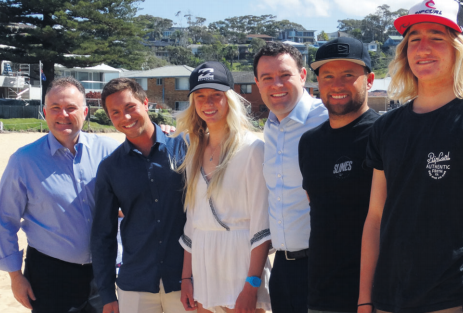 Top class surfing is set to return to Avoca Beach in 2017 following the success of the Komunity Project Central Coast Pro earlier this year.

Minister for Sport, Mr Stuart Ayres, joined Member for Terrigal, Mr Adam Crouch, to launch the event, which forms part of the NSW Pro Surf Series, and will provide a big boost for local hotels, restaurants and businesses. “The 2017 NSW Pro Surf Series will contribute over $1.8 million to the NSW economy in visitor spending, attracting 1,000 overnight visitors to the four event locations,” Mr Ayres said. “The event will attract over 200 surfers from around the world to Avoca Beach, competing over fi ve days from March 8-12, 2017,” he added. Mr Crouch said the Komunity Project Central Coast Pro was one of the highlights of last summer and spectators will enjoy the event’s bigger and better return next year.

“The Central Coast Pro is an offi cial World Surf League Qualifying Series event, and will showcase our spectacular region and coastline to surfers and fans from around Australia and the world. “I look forward to seeing Avoca Beach packed with competitors and spectators next summer,” Mr Crouch said. Destination NSW Chief Executive Offi cer, Ms Sandra Chipchase, said the Central Coast region has so much to offer event visitors. “I encourage all surfi ng fans to make plans to get to this incredible region for the Central Coast Pro, and make sure they take some time while there to experience everything the area has to offer,” Ms Chipchase said.

Fishing bans in place around Budgewoi Creek and Lake