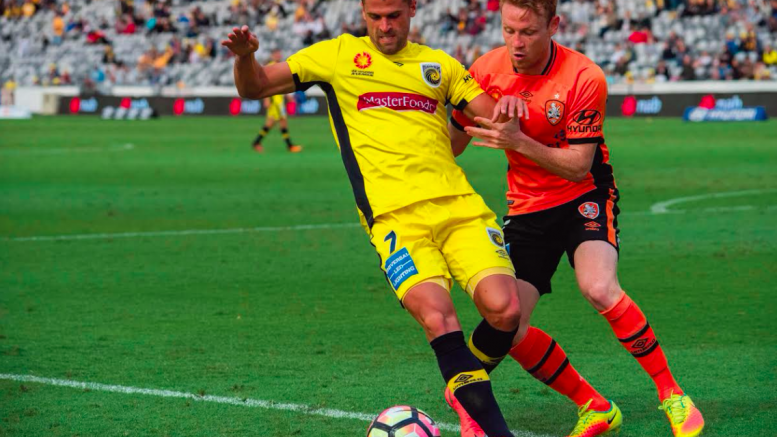 The Central Coast Mariners’ new coach, Paulo Okon, decided on a defensive four-four-two formation for the opening home game of the A-League season, but the team still failed to keep a clean sheet, going down in front of a 7,073-strong Gosford crowd to Brisbane Roar 0 to 1.

“At the moment, we cannot seem to stop other teams from scoring, and that makes it difficult towin football games,” Okon said after the game at Gosford’s Central Coast Stadium on Saturday, October 22. In fact, the Mariners have not managed to keep a clean sheet for over a season, a statistic Okon hopes to change soon. His newest defensive recruit, Scott Galloway started the match on the bench. Okon gave defenders Neill, McGing, Faty and Roux one more chance to stop the Roar from scoring in front of a loyal home crowd. Izzo in full flight manages the Roar at Gosford

Izzo had his first chance in goals for the Mariners this season and managed some convincing saves.

The main tasks ahead for Okon will be to strengthen the Mariners’ defence and midfield. During the first 20 minutes of play, Connor Pain made multiple runs up the left wing, providing fans with some early opportunities to get behind the home side.

The Mariners dominated play for much of the first half with great energy against the visitors, but rusty passing betrayed the home side’s first-half ambitions.

The referee, Adam Fielder, also seemed flat footed, making some decisions that got the goat of Okon on the sidelines. Connor Pain created some promisi … acking opportunities for the Mariner

Standouts Conner Pain and Roy O’Donavan both showed flashes of magic at times. Brisbane Roar’s Thomas Kristensen, scored the only goal of the match in the 33rd minute, against the run of play, by managing to capitalise on the Mariners’ defensive weakness.

The Mariners seemed to immediately lose their confidence and early dynamism, a result of which, the visitors used to renew their energy.At half time the sun emerged to show off the incredible view of the waterways ironically called Brisbane Water.

The Mariners again started with gusto in the second half and received some early hope with a run by O’Donovan that very nearly paid dividends.

Young Trent Buhagiar replaced Ferreira at the 58th minute. Buhagiar was quick to get into the thick of the action and create a few goal-scoring opportunities that could not be pulled off.

Okon reached for the bench again, taking off the Mariners’ captain, Montgomery, with around 20 minutes to go, bringing on young recruit Adam Berry.

Brisbane continued to play an intense and professional game and were unlucky not to score a few more goals against the home side.

The Mariners, it must be said, were much improved from the deep dark days of season 2015-16 and appeared to need a bit more “together time” to gel as a team. Scott Galloway, Okon’s first recruit, managed some time on the park late in the match.

A couple of combinations between Buhagiar and O’Donovan provided some hope for an equalizer but, after four minutes of extra time and denied calls for a clear penalty, the Mariners failed to roar.

The 0 to 1 result was a sad start to the first home game for the smallest club in the league.