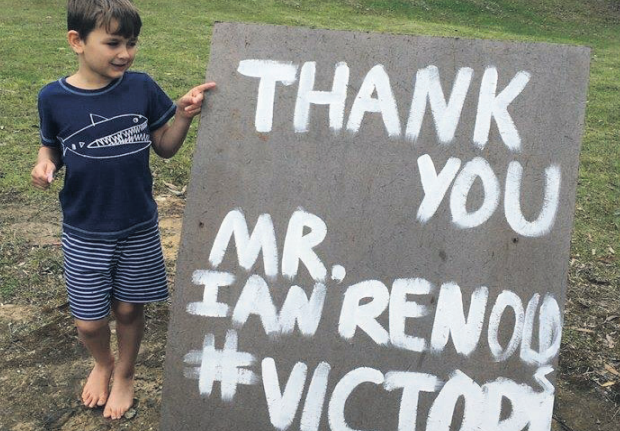 A 12 month community campaign has won its battle to stop the reclassification and potential sale of 25 community reserves and parks across the city of Gosford.

Ms Sue Chidgey, the founder of Save Central Coast Reserves, the umbrella group that coordinated the community’s campaign against the land sale strategy, said Mr Reynold’s decision had “brought immense relief to the communities whose neighbourhood sites were threatened. “Save Central Coast Reserves, the Community Environment Network and eight additional community groups across the Gosford region have campaigned for over a year for the protection of their 25 local reserves, parks and green spaces,” Ms Chidgey said. “Only two Councillors voted against the Land Sale Strategy when it was fi rst announced, Ms Vicki Scott and Ms Hillary Morris.

“In the campaign that followed, hundreds of community emails and submissions were sent to the Mayor, CEO and Councillors, as well as a large petition. “In addition, rallies were held, as the community pleaded for the protection of their sites. “Then in early 2016, with the Council Amalgamation, the community again rose up and sent huge numbers of emails and submissions to the new Administrator and CEO,” Ms Chidgey said. “Many of our communities now look forward to joining with Council in the ‘Adopt a Park’ initiative to enhance their community sites for the well-being of their community and for the urban environment.

A consultant was appointed in early 2016 to review the potential reclassifi cation of community land, and to undertake the community consultation process on Council’s behalf, including public meetings to gauge the views of the community. Council’s Administrator, Mr Ian Reynolds, said the former Council had started the process with the best intention to help fund its infrastructure backlog, but in the end, the numbers didn’t stack up. “After weighing it all up in the context of the merged Council, I believe Council can find more efficiencies and savings in our now consolidated budget without the need to sell community land as a strategy,” Mr Reynolds said.

“This will be welcome news to the many residents who approached me directly with concerns about the potential loss of open space in their neighbourhood and the hundreds who put in submissions. “There is genuine benefit for Council to listen to the community…

“They know about their own neighbourhoods and what is needed to help sustain communities and enhance quality of life. The former Gosford Council’s “highly contentious” Land Sale Strategy was abandoned by Mr Reynolds at an ordinary council meeting on September 28. The “affection” expressed by the community towards their reserves also resulted in Mr Reynolds calling for Central Coast Council to explore establishing an Adopt a Park Scheme. A report prepared by the unit of the Chief Executive Officer, Mr Rob Noble, and presented to Mr Reynolds at the meeting, suggested that the new Council may wish to reconsider whether to implement some or all of the strategy. However, after listening to three speakers on the issue, Mr Reynolds said: “In no uncertain terms the community has made its views clear to me and Council. “I know a lot of people are interested in this report and issue because they have been raising it with me on a regular basis since I arrived here in May,” he said. Council has listened to the community and taken decisive action by not implementing the proposed strategy, Mr Reynolds said. Mr Reynolds then formally resolved to take no further action in relation to resolutions that had been made by Gosford Council to reclassify and sell community land. “This is a clear expression of my views,” Mr Reynolds said as the formal resolution was greeted with applause from the public gallery at Wyong’s Council Chamber. Some blocks identifi ed by Gosford Council were already classifi ed as operational land including sites at 139 Faunce St, Gosford; 88a Empire Bay Dve in Bensville; 12 Gibbens Rd, West Gosford; and, 9 Russell Drysdale St, East Gosford. After the meeting, a media statement from Council provided the following clarifi cation on the potential sale of operational sites: “Irrespective of the land classifi cation of any site, Council carries out a rigorous due diligence process before fi nalising decisions on whether any parcel will be sold or retained”. According to the statement, that process involves a review, marketing and then the subsequent sale of each of the operational land parcels. Mr Noble’s status report provided a clear explanation of the process involved in the reclassifi cation of community land. “Public land that is classifi ed as community may be reclassifi ed as operational by way of a Local Environmental Plan (LEP) made under the Environmental Planning and Assessment Act 1979,” the status report said. According to the report, the EP&A Act prescribed mandatory steps in the making of a Local Environmental Plan. The fi rst of those steps was the submission of a planning proposal to the NSW Minister for Planning. According to Mr Noble’s status report, the former Gosford Council did not ever take that fi rst step in executing its Land Sale Strategy. “The LG Act and the EP&A Act prescribe a number of mandatory steps that must be taken to effect re-classifi cation of public land from community to operational by way of an LEP,” the status report said. “The former Gosford Council did not initiate any of those steps. “The [Central Coast] Council has not initiated any of those steps. “The parts of the September and December Resolutions that required that land be re-classifi ed from community to operational have therefore not been implemented,” the report said. According to Mr Noble’s status report: “The proposed re-classifi cation of public land, and the subsequent potential sale of the re-classifi ed land, was a contentious issue resulting in a signifi cant number of submissions from the community.” The status report posed the question: “Is the Central Coast Council obliged to implement the Land Sale Strategy of the former Gosford Council?” Mr Noble responded in his report: “The former Gosford Council was dissolved, and the Central Coast Council constituted, on the publication of the Local Government (Council Amalgamations) Proclamation 2016 (“the Proclamation”) on 12 May 2016. “Sub-clause 17(2)(b) of the Proclamation provides that the Central Coast Council may complete or discontinue anything that the former Gosford Council commenced. “That is, the Council has discretion whether or not to implement some or all of the Land Sale Strategy of the former Gosford Council,” Mr Noble’s report said. “A key aspect of the May 12 merger of the former Gosford and Wyong Councils was to maximise funding opportunities through greater scale and capacity, and potential new external funding opportunities,” the status report said. “Deferring or terminating the re-classifi cation process will save about $750,000, but will result in a corresponding loss of sales revenue of between $6 million to $10 million (depending on market conditions at the time of any sale and the number of properties that would have eventually been sold),” the report said. The Local Government Act of 1993 prescribes how a council must manage and deal with its public land. Council must classify all public land as either operational or community land and cannot sell or otherwise dispose of public land that is classifi ed as community land. The management of community land is subject to other signifi cant constraints including on how it is leased, licenced or occupied, according to the status report. Operational land can only be sold by a resolution of council. Submissions received by the former Gosford Council and the Central Coast Council in respect of the Land Sale Strategy were kept confi dential as they were deemed to include personal information about individuals who were not councillors.

Power outages rolling across the Coast