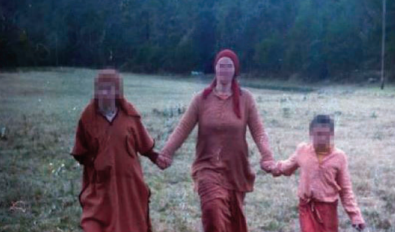 Photographs from inside the Mangrove Mountain Ashram, which were tendered to the Royal Commission

The Royal Commission into Institutional Responses to Child Sexual Abuse released a report entitled ‘Case Study 21 the response of the Satyananda Yoga Ashram at Mangrove Mountain to allegations of child sexual abuse by the Ashram’s former spiritual leader’.

The report concentrates on the activities of Swami Akhandananda Saraswati and his lover “Shishy”, and was released on September 14. The report follows a public hearing in December 2014 and oral submissions in April 2015, which explored the experiences of 11 survivors of child sexual abuse at or connected with the Ashram, and the response of the Ashram to that child sexual abuse. Satyananda Yoga Ashram was established in the early 1970s, and from about 1974, was overseen by Swami Akhandananda Saraswati. In 1989, Swami Saraswati was arrested on charges of child sexual abuse and was sentenced to two years and four months imprisonment. Residents, who included between 12 and 22 children at any one time, followed the key philosophies and practices of Satyananda Yoga, which were based on the principles of the guru disciple relationship and development of mind, body and spirit. According to the report, shortly after his arrival, Swami Saraswati began a sexual relationship with 17 year old Shishy, who through this relationship, became second in charge at the Ashram. “Saraswati and Shishy remained together in a sexual relationship, albeit an increasingly violent one, until the end of 1985”, the report said.

The Royal Commission received evidence from 11 adults (ten of whom were female) who reported that they were sexually abused as children living at the Ashram. The Royal Commission heard that a number of the survivors of abuse were sexually abused by Saraswati on overnight trips to other Ashrams and/ or were summoned to his private room at the Ashram to massage him and then to perform oral sex on or have sexual intercourse with him, the report said. The report notes that there was no evidence of any child protection policy or procedure in place at the Ashram between 1975 and 1989.

The Royal Commission heard from several former residents of the Ashram who gave evidence of the culture of physical abuse and public humiliation at the Ashram, including severe beatings and threats of harm meted out by both Saraswati and Shishy. Key evidence presented to the Royal Commission included a submission by abuse survivor, Ms Alecia Buchanan, who entered the Ashram at age 13, independent of her family. Ms Buchanan’s submission claimed that Shishy acted as a mother fi gure to the children at the Ashram and that Shishy was a person that all the children looked up to at the time. Ms Buchanan’s submission also alleges that Saraswati would sexually abuse her in the presence of Shishy, both at the Ashram and on trips. Ms Buchanan also reported being slapped by Shishy on a number of occasions across the face, and testifi ed in her submission to witnessing more serious acts of physical abuse towards other children at the Ashram.

The barrister representing Ms Buchanan, Ms Sharyn Hall, also outlined in their submission the failure of the Ashram’s policy and decision making regarding the allegations of child sexual abuse and stated the dual role of Saraswati as the spiritual guide and person who controlled the day to day at the Ashram, ensured that there was no processes by which a complaint could be made. “The inhabitants of the Ashram were not encouraged to think for themselves and were indoctrinated in the ‘divine’ nature of the people who led them,” Ms Buchanan’s submission stated. “As full time residents of the Ashram, the allencompassing nature of this meant that they were poorly placed to be able to cope, let alone deal, with such serious allegations and for the most part, continued to follow the instructions of the man they looked to for guidance in all aspects of their lives,” Ms Hall said.

Shishy also presented a submission to the hearing in which she alleges allegations made against her directly resulted from the context of her relationship with Saraswati, the power imbalance between the two, and the complex and hierarchical nature of Ashram living at the time. Shishy’s submission also cited the nature of Saraswati’s role as both the Ashram’s “divine leader” and fi rst in command as driving factors in the way Shishy reacted and contributed to the abuse. Shishy’s submission also stated that she did not even consider Saraswati’s actions abusive because of the culture at the Ashram she had experienced since she was young. The submission claimed Shishy realised the abusive nature of Saraswati’s actions only after leaving the Ashram in 1985.

Shishy’s submission also highlighted her expression of remorse in her failure to protect the children from Saraswati’s abuse, her own physical abuse and her remorse at engaging in a sexual relationship with a 15 year old boy. Despite this, the Report found Shishy was aware of and failed to prevent the sexual abuse of children residing at the Ashram and that until her departure from the Ashram in 1985, Shishy facilitated the sexual abuse of a number of children by: on occasion summoning a child to attend to her shared cabin with Saraswati; and on occasion remaining in said cabin in silence whilst sexual abuse occurred.

The Report also found that when the Bihar School of Yoga in India, the spiritual headquarters of the Satyananda Yoga movement, first heard of the Royal Commission’s investigation into the sexual abuse of children by Saraswati, their primary concern was to minimise the risk of damaging the reputation of Satyananda Yoga. “The Bihar School of Yoga’s response did not properly prioritise the welfare of survivors over the interests of the ‘brand’ of Satyananda yoga,” the report states. Commissioners also considered that during the public hearing, the Mangrove Mountain Ashram adopted an approach that was at times insensitive, defensive and legalistic.