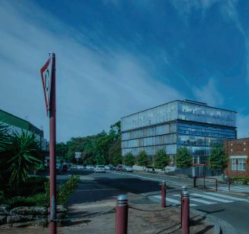 The Joint Regional Planning Panel (JRPP) will meet to consider a Government Property NSW application to build a second mixed use commercial development on the former Gosford Public School site.

The application has been lodged as a Crown application which means the JRPP cannot impose conditions or refuse the application without the agreement of the applicant or the Minister for Planning. The JRPP meeting is scheduled for Thursday, September 15, and will be held in the Gosford Council Chambers in Mann St at 5:00pm. The building would be located at 32 Mann Street, next to the Doma Australian Taxation Office development which is currently the subject of a Land and Environment Court challenge. The Central Coast Council has submitted an assessment report to the panel recommending that it grants “deferred commencement consent subject to conditions”.

The proposed development would include a six-storey A-grade commercial building with three levels of basement parking. “The ground floor is to include uses such as café, retail and business services to activate the street frontage along Mann St with traditional office space above,” according to the JRPP meeting notice. The JRPP website lists the capital investment value of the project at $34.2 million. The public exhibition period closed on May 29 and 57 submissions were received including 28 in favour of the development and 29 against. The proposal would see pedestrian access to the new building from Mann St and vehicular access from Baker St. It would include 7,700 square metres of commercial floor space and 104 car parking spaces. According to the Central Coast Council’s assessment report to the JRPP: “The building height and floor space ratio are below the maximum permitted by the Gosford Local Environmental Plan 2014 and the proposal complies with the building setbacks and the car parking rates required.

“The proposal is to accommodate 300- plus jobs from the NSW Department of Finance, Services and Innovation.” According to the Central Coast Council’s report, the proposal is consistent with the Gosford City Centre Masterplan and Chapter 4.4 Gosford Waterfront, except for issues relating to active street frontage to Baker St, sharing vehicle access, location of disabled parking, visibility of vehicle entrance door/elevation from Baker St and the waterfront. Submissions in support of the project pointed to the economic benefit of the creation of 300 jobs to help revitalise the Gosford city centre. Reasons for objection were mainly due to the belief that the site should be retained and used for public and community use, such as a performing arts centre. Central Coast Council stated its reasons for supporting the proposal as: it is a permissible use, the design complies with the GLEP and GDCP objectives; and the additional employment (300 plus jobs) will activate the currently vacant site, promote investment and help to revitalise the city centre and waterfront.

According to the report from Council, requirements for design excellence were considered in its assessment of the application and considered it “consistent with the requirements”. “In particular, the proposal offers a good standard of architectural design, which is appropriate for the area, and employs design features in the front elevation that enhance the appearance of the development and are consistent with creation of interesting and active pedestrian environments. “Future development on the western side of the site will screen the western elevation. “Until that time, landscaping is being provided to improve the visual impact from the waterfront and Baker St,” the council report said.

“There are no towers proposed on the site, and the street frontage height and building height comply with the maximum limits.” The council’s assessment report also looks at the development in relation to the 2010 Our City Our Destiny Masterplan and acknowledges that the site is in the Waterfront Precinct. The report acknowledged that the Master Plan identifi ed the Waterfront as “the jewel in Gosford’s crown”. According to the report: “A new land use framework for the Gosford Waterfront has been established through an amendment to Gosford’s Local Environmental Plan.

“It is considered that the proposed development will complement the locality and meet the desired future character of the area. “The proposal is permissible under the B4 zoning and complies with the maximum height and FSR required under GLEP 2014. “The proposal provides adequate on site car parking and access. “The existing road system can cater for the additional traffi c generated subject to construction of the extension of Baker St. “The proposed development will create signifi cant employment (300 plus jobs) in the City Centre which will act as a catalyst for other developments and increase demand for other goods and services within the city. “The location of this building will not prevent the balance of the site (about 1.1 ha) being developed for other purposes. “The issues raised in public submissions objecting to the proposal relate mainly to the use of the site for a commercial building rather than a community use such as a performing arts centre. “Employment generation is essential to create a liveable city with resident population which is supported by appropriate access to goods and services.”

Motion of no confidence in Council CEO

A big prize that didn’t slip ‘Through The Cracks’

LPP is a rubber stamp for development – Tesch