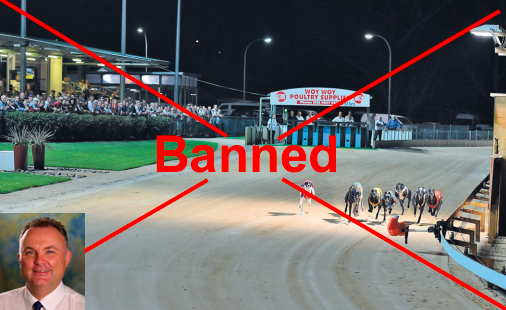 Member for Terrigal, Mr Adam Crouch, said the decision to vote against legislation to ban greyhound racing in NSW by Member for Wyong, Mr David Harris and Member for The Entrance, Mr David Mehan, was disappointing, and condoned cruel treatment of greyhounds.

Mr Crouch said the legislation to ban greyhound racing passed both houses of Parliament on August 24. “This decision was not taken lightly as it impacts on many people on the Central Coast and throughout NSW, whose livelihoods depend on the industry,” Mr Crouch said. Despite this, Mr Crouch said the fi ndings in the Special Commission of Inquiry Report into the Greyhound Industry could not be ignored.

“I understand that greyhound ownership, training and racing has a long history here on the Central Coast and that there are many who love their dogs. “However, with the rogue operators who were unwilling to change their practices, and the leadership in the industry dismissive of the report, something drastic had to be done to save thousands of dogs and the animals used for ‘blooding’ practices from this cruelty and death,” Mr. Crouch said. Mr Crouch also said the government is committed to investing every cent it receives from Greyhound betting between August 2016 and July 1, 2017, to fund the industry’s transition.

The proceeds from betting though the NSW TAB on interstate greyhound races will contribute to the feeding and caring for exracing dogs. “We are committed to an orderly and humane closure of the industry and will provide assistance to greyhound owners, breeders and trainers who have done the right thing,” Mr Crouch added. “The Baird Government did not come into politics to shut businesses down but to rebuild NSW after years of neglect,” he continued. “The systemic problems of cruelty in the Greyhound Industry were not going to be ignored because the decision was too hard to make,” Mr Crouch concluded.

The War and Peace of Warnervale Airport

Councillors want to consult with the community over the airport