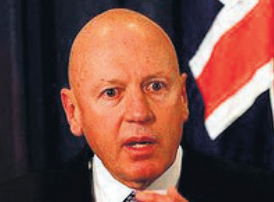 The former Member for Gosford and Terrigal (on the Central Coast), Mr Christopher Hartcher, has been found by the NSW Independent Commission Against Corruption (ICAC) to have acted with the intention of evading election funding laws by failing to properly disclose political donations worth “hundreds of thousands of dollars”; by accepting donations from property developers; and by breaching caps on political donations that applied after January 1, 2011.

The ICAC report called for the DPP to be asked to consider prosecuting Mr Hartcher for an alleged offence of larceny. The ICAC’s Operation Spicer investigation exposed prohibited donations, fund channelling and nondisclosures in the NSW Liberal Party’s 2011 state election campaign and identified Mr Hartcher as a key player in a considerable number of transactions for campaigns in his seat of Terrigal and for the seats of Wyong and The Entrance. The Commission did not uncover any irregularities in the seat of Gosford, at that time held by Mr Christopher Holstein.

The Commission’s report, Investigation into NSW Liberal Party electoral funding for the 2011 state election campaign and other matters, was made public on Tuesday, August 30. The ICAC made factual findings but could not make findings of Corrupt Conduct in relation to conduct that “only relied on a breach of the Election Funding, Expenditure and Disclosures Act 1981”. The Commission was not able to make corrupt conduct findings in cases of failure to comply with the requirements of the election funding laws where, although those failures could have affected the exercise of official functions of the then Election Funding Authority of NSW, officers of that authority were not involved in any wrongdoing.

The Commission’s report noted that at the relevant time, proceedings for an offence under the election funding laws had to be commenced within three years from the time the offence was committed. “As the Operation Spicer public inquiry did not conclude until September 2014, and the matters canvassed in the report occurred mostly from 2009 to 2011, a prosecution for relevant offences is now statute barred,” the statement said. In relation to the alleged offence of larceny, the ICAC report said: “The Commission is of the opinion that consideration should be given to obtaining the advice of the DPP with respect to the prosecution of Mr Hartcher for an offence of larceny in relation to his dealings with … three bank cheques payable to the NSW Liberal Party totalling $4,000,” it said. According to ICAC, in March 2011, Mr Hartcher received three bank cheques payable to the NSW Liberal Party totalling $4,000.

“They were received by Mr Hartcher for the benefit of the NSW Liberal Party for the March 2011 state election campaign. “In November 2011, some eight months after the election, Mr Hartcher arranged for the cheques to be paid into the trust account of Hartcher Reid, a legal firm, and for that firm to draw a cheque for $4,000 in favour of Mickey Tech, a business owned by the partner of Mr Raymond Carter, an electorate officer working for Mr Hartcher. According to the ICAC, Mr Carter had been a member of the NSW Liberal Party since 1972 and had held a variety of offices, including presidency of the Liberal Party Green Point Branch. “There was a long connection between Mr Carter and Mr Hartcher, and it was quite apparent that Mr Carter felt a deep sense of loyalty toward Mr Hartcher.” the ICAC report said.

“In the end, the Commission believes that Mr Carter’s evidence at the public inquiry was honest and reasonably accurate. “Mr Carter was also a very successful fundraiser, with extensive connections on the Central Coast.” After the $4,000 was deposited into the Mickey Tech account, it was allegedly withdrawn in cash by Mr Carter and given to Mr Hartcher, according to the ICAC report. “These steps are inconsistent with an intention on the part of Mr Hartcher to apply the $4,000 for the benefit of the NSW Liberal Party,” the ICAC report alleged. “Mr Hartcher gave evidence under a section 38 declaration and therefore his evidence is not admissible against him in criminal proceedings other than proceedings for an offence under the ICAC Act.”

The ICAC report argued, however, that other evidence would be admissible, including the evidence of Mr Carter, Mr Sriwattanaporn, Sebastian Reid, Marie Neader, Annette Poole, associated bank records, and internal documents of Hartcher Reid. In addition to the larceny allegation, the key factual findings in the ICAC report included the use of the business of Mr Timothy Koelma, who commenced work as an electorate officer for Mr Hartcher in 2009, called Eightbyfive, to receive and channel political donations for the benefit of the 2011 campaigns of the NSW Liberal Party, Mr Hartcher, and other Central Coast Liberal candidates. The use of Eightbyfive, according to ICAC, was with the intent of evading the election funding laws. “Mr Timothy Koelma directly benefited from the donations through Eightbyfive, as he was able to draw from those funds to give himself a salary, thereby, enabling him to work for Mr Hartcher on the 2011 NSW state election campaign.

“Mr Koelma subsequently obtained full-time employment in Mr Hartcher’s ministerial office after the 2011 election.” According to the ICAC report, Mr Hartcher was involved in the establishment of Eightbyfive and took an active part in using it to channel donations for the 2011 campaign from Australian Water Holdings Pty Ltd ($183,342.50 between April 2009 and May 2011), Gazcorp Pty Ltd ($121,000 between May 2010 and April 2011) and Patinack Farm Pty Ltd ($66,000 between July 2010 and March 2011)