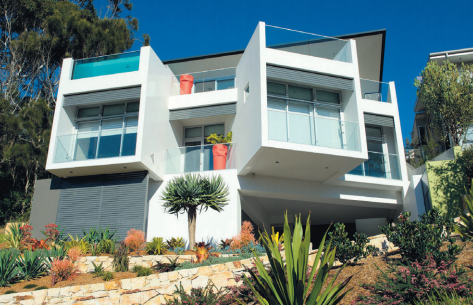 Widely regarded as the highest profile event on the construction industry calendar, the NSW MBA awards celebrate the state’s top builders. This year the awards attracted around 800 submissions from a mix of metropolitan Sydney and regional builders. This latest award is icing on the cake for MudgeCorp after winning four of the fi ve awards last year for the Avoca Beach home at the 2015 Newcastle MBA Awards, including Swimming Pool of the Year and the Efficient Use of Water award.

This culminated in MudgeCorp being named Housing Builder of the Year for 2015, a major coup for the company that celebrated its 10th anniversary last year. MudgeCorp Managing Director, Mr Stephen Mudge, was joined on stage by fi ve of his team members to accept their latest accolade on August 27. We were absolutely thrilled to receive this prestigious award, our fi fth win for our ‘Beach Build’ Avoca Beach residence project,” Mr Mudge said. “It is an honour to be recognised amongst the best in residential building, quality, workmanship and innovation across a broad cross-section of the residential building sector in NSW,” he added. Designed by local architects, the coastal home at Avoca Beach has already attracted widespread attention, including a front cover feature in one of the industry’s most respected publications.

The four-level home is serviced by an internal lift and constructed from a combination of masonry and lightweight cladding with multiple metal fl at roofs. Living areas on level three extend outward to a terrace and plunge pool featuring a clear glass panel to maximise the property’s panoramic ocean and beach views.