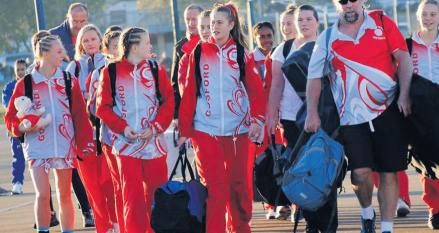 During a meeting on August 15, concerned sporting codes have described the Central Coast Council’s attitude to the redevelopment of the Adcock Park sporting precinct as an outright attack on women’s sport.

Four codes were represented at the meeting to discuss the proposed redevelopment of Adcock Park and concerns were raised about a lack of consultation in the planning stages, inappropriate design of amenities, problems with parking and access, lack of playing surfaces for the various codes and potential serious child safety concerns. There are upwards of 5,000 netball players, offi cials and spectators who gather at Gosford Netball Club on a Saturday.

The club’s membership base consists of approximately 2,500 female participants, with 1,500 of these being junior members starting from 5 years of age. Secretary of Gosford Netball Association, Ms Leanne Phillips, said: “The orientation and layout of the proposed amenities block does not suit young children and may pose a serious safety risk to our young players. “This proposed building design has huge implications for our Association, our competition and how we function. “The new licensing agreement will mean that all codes will be forced to raise fees, and this will impact on our members and our mission to be an inclusive association, providing opportunities for every young girl and woman to get out and enjoy a wonderful sporting experience in her local community.”

President of Central Coast Baseball, Mr David Bryant said: “We should have facilities capable of hosting local, regional, national and even international events. “Instead, we are left with a short sighted proposal that will clearly disadvantage sport on the Coast.” “Central Coast Council are putting the cart before the horse.” “With limited space available and a number of codes needing to be accommodated, getting the fi eld layout right is paramount to the success of the re-development,” Central Coast Oztag’s Mr Aaron Heward said. Ms Phillips also said that the Central Coast Touch Association shared the other sporting codes’ concerns. A Gosford City Sports Council spokesperson stated that: “The Sports Council supports the concerns of the stakeholders and would like to remind Central Coast Council that Adcock Park is a regional sporting facility and any reduction in the capacity and capability of Adcock Park will have an adverse impact on the local community.”

Despite the criticism of the Adcock Park redevelopment a Council spokesperson said the concept plans were designed incorporating the individual feedback of six sporting codes that used the existing facility. According to the spokesperson: “Council considers Adcock Park a signifi cant regional facility and aims to incorporate new multipurpose amenities, upgrade sporting fi elds and improve car parking.” The spokesperson also said that the concept plans refl ected a design that the community could share through the breaking down into sections and that safety had been factored into this design, as the design allows for areas and sections to be pedestrianised, lit, locked and closed. The new concept plan replaces the three old amenity buildings, that the Council spokesperson labelled unfi t for use, with additional toilets, canteens, storage, club houses, changing rooms, umpire room, balconies and medical room. “Council is committed to delivering a modern facility that caters for all six sporting codes who currently use Adcock Park, which will ultimately benefi t the wider community,” the spokesperson concluded. Media Release, Aug 17, 2016 Leanne Phillips, Gosford Netball Association Secretary