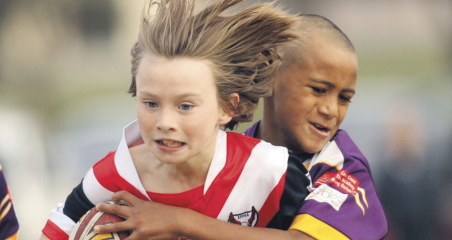 Only three rounds remain before the 2016 Central Coast junior rugby league semi-finals kick off and a mad scramble for top five positions is in full swing across the various age divisions.

The Gosford Kariong Storm have half a dozen teams that remain in strong contention for a fi nals berth with the U10(2)s, U12(2)s and U16(2)s appearing to be best placed to give plenty of cheek to the heavyweight clubs come late August. A thrilling 28 all draw played out between the Storm boys and the second placed Woy Woy during round 11 of the U10(2) competition, highlighted just how close the race for the Brian McGee Shield is this season.

A Roosters’ conversion after the final bell levelled the scores in what was a tremendous game of junior rugby league. An injury and suspension ravaged Storm U15(2)s fought back from a 12 point defi cit early in the second half, to record a gutsy 20 all draw against Toukley in an entertaining round 12 clash. Byron Buckley capped a fi ne individual performance when he threaded a last minute kick into the south western corner for Chris Murphy to pounce on for the match levelling try. The Gosford U12(2)s notched a crushing 56-0 win over St Edwards and look to be on a preliminary minor semi-final collision course with the Blue Haven Raiders.

While U13(2)s speedster Nash Dorratt-Mavin won the purple heart as the clubs busiest player of round 12. The representative three quarter starred in his side’s 28-8 win over Umina at Kincumber in the morning, before fi lling in for the U14(2) s who were edged out 18-16 by Wyong. Later in the afternoon, young Nash laced up the boots for his third game of the day, holding down a wing spot in the U15(2)’s exciting draw against the Hawks at Terrigal. The Gosford U11(3)s are well out of fi nals contention, however they received the biggest cheer of the round 10 weekend after storming home to claim their fi rst victory in over eighteen months, defeating Erina 32-30. Trailing by ten at the break, and 30-14 soon after, the Gosford boys rallied magnifi cently to score the final three tries of the contest.

Playmaker Lyndon March levelled the scores with just a few minutes remaining before Matt LeMaistre stepped forward to calmly add the telling conversion; pushing the battling Stormers into the unfamiliar confi nes of the winners’ circle.