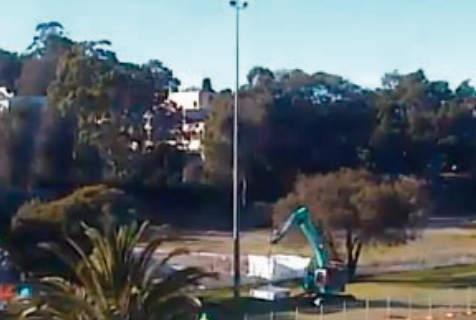 The Baker St extension has been fenced off for sewer work

Sewer upgrade works have resulted in Central Coast Council fencing off the area of the Central Coast Leagues Club Field that it has also described as the Baker St road reserve.

According to a statement from Central Coast Council: “Council has fenced off the Baker St road reserve between Georgiana Tce and Vaughan St for sewer upgrading works. “The sewer works are expected to be completed by mid-November,” the statement said. “The construction of Baker St road works will be carried out as development on the adjoining land,” the statement said, referring to the Baker St South extension, mooted as part of the redevelopment of the former Gosford Public School land.

“The developers will pay the cost of road construction.” According to Central Coast Council, Baker St is planned to connect to Vaughan St from Georgiana Tce in the future. “This is shown in the Gosford City Centre Masterplan and Chapter 4.4 Gosford Waterfront of DCP 2. “Baker St is required to be constructed under the Roads Act as a condition of consent on the adjoining land. “The conditions of Development consent DA49223/2016 require construction of part of Baker St. “Public consultation was carried out, (but not advertised in this newspaper) under the exhibition of DA 49223/2016, and exhibition of the Gosford City Centre Masterplan and DCP 2013. “Council is aware of the potential archaeological sites and has commissioned a consultant archaeologist to investigate the area in Baker St in conjunction with the proposed sewer works,” the statement said.