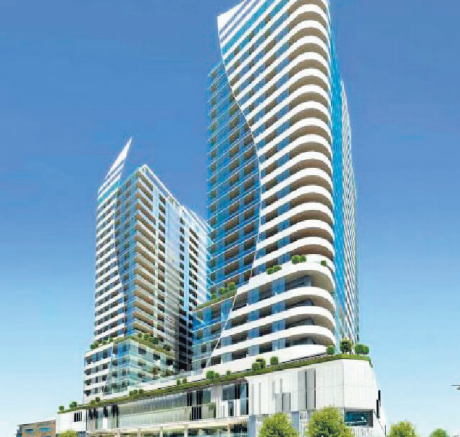 Fifteen months into a two-year development consent, the Mariners Plaza development, on the corner of Mann St and Donnison St, Gosford, appears to be at a standstill.

The Joint Regional Planning Panel approved the $175 million development application on Thursday, May 14, 2015, by four votes to one. Spokesperson for the Chinese consortium behind the development, Ms Louise Lin, said rumours the site was for sale were false. “We have not engaged anybody to sell the site,” Ms Lin said. “We have engaged a local consultant to market the property for off the plan sales,” she said. Ms Lin said the developer was working towards submitting a Section 96 application to amend the development consent “to make the project more commercially viable”.

“It is quite important to us; we want to include a four or five-star hotel, and the performing arts centre would give us a unique edge and ensure a market for the hotel. “Gosford has no attraction, it is quite run down and this is our fi rst project, so we are quite aware of the market risk and have to convince people to buy in Gosford.” Ms Lin said she understood that the developers must have believed in the project’s potential before being asked to incorporate plans for a performing arts centre, but she said the market had changed since then. “Our building is a very expensive building,” she said.

Ms Lin said that, during discussions about incorporating a performing arts centre, Mr Anderson had expressed concerns about the viability of making a large capital outlay for such a centre on the Gosford waterfront. “Mr Anderson said he was aware of the risk of building a white elephant on the waterfront but incorporating the performing arts centre into a commercial development would give it leverage,” Ms Lin said. According to the JRPP’s determination and statement when it approved the development, the principal reason for the decision of the majority of the panel was that the proposed development was in the public interest.

The DA significantly exceeded the maximum height and floor space ratio under Gosford Local Environmental Plan 2014. However, the panel was satisfi ed the applicant had addressed the requirements of the Gosford Local Environmental Plan 2014 by “satisfying that there were suffi cient environmental planning grounds to justify contravention”. According to the JRPP, the proposed development was consistent with the direction of state and regional planning policies, particularly the development of housing and jobs in existing centres with good access to services and transport.

“The proposal was developed through a competitive design process and reflects a development that exhibits design excellence worthy of landmark tower status for Gosford Town Centre,” the JRPP determination and statement of reasons said at the time of its approval. In its report to the JRPP in support of the project’s approval, Gosford Council’s governance and planning directorate described the project as a mixed use development with commercial and retail, including a supermarket, hotel and shop top housing. The proposed building would consist of a podium with two towers above and was called the Mariners Plaza. Gosford Council said its reasons for supporting the DA were that the design was an innovative approach to the site with three street frontages.

Council’s report to the JRPP said it “achieved design excellence through a high standard of architectural design featuring active street fronts, articulated facades, variation in external materials and fi nishes, stepping the building back at higher levels and landscaping at street level and above.” But will the “iconic structure to identify the Gosford City Centre” ever come to fruition? Mr Tim Gunasinghe at Commercial HQ said the original development application had been approved before the Chinese consortium behind the proposed development had acquired the land. “The land sale has been settled and the Chinese consortium now owns the site,” Mr Gunasinghe said.

“What they are telling us is that they are preparing to get a Construction Certifi cate so they can get on site and activate the DA,” he said. “That is what they have told us but we have heard rumours that they are trying to sell,” he said. A statement from Central Coast Council said: “Council’s understanding was that it was being sold to a developer but that appears to have stalled at this stage.”