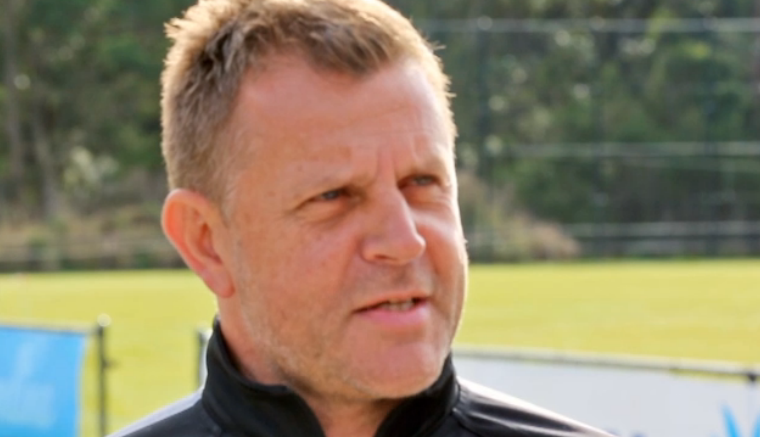 The Central Coast Mariners wish to advise its members, fans and the media that the club has parted company with head coach, Tony Warmsley, effective immediately.

Walmsley was appointed head coach of the Mariners in April, 2015. Club offi cials, John Hutchinson, Matthew Nash, Brice Johnson and Ben Cahn, will continue the club’s pre-season preparations until a permanent head coach has been appointed before the start of the Hyundai A-League 2016/17 season. The Mariners will commence the recruitment process for its new head coach immediately and will advise its members, fans and the media when a successful candidate has been assigned. “It’s time for me to move on to explore a number of opportunities,” Walmsley said.

“I’m happy with my contribution to the club over a number of years. “Last year was particularly tough and I sacrificed a lot, but I’m confi dent the work undertaken will bear fruit. “I believe in the group of players I’ve assembled for this season and the new coach will be coming into a much healthier environment than the one I inherited,” Walmsley said. Central Coast Mariners’ executive vice chairman, Peter Storrie, thanked Walmsley for his commitment to the club and wished him the best in his future endeavours. “On behalf of the Board of Directors, I would like to thank Tony Walmsley for the level of commitment, dedication and passion that he gave to this club,” Storrie said.

“Under Tony’s tutelage, most recently as the club’s head coach, and originally as head of youth development, many young players have been exposed to the Hyundai A-League. “Tony has been crucial to the major steps forward this club has taken in regards to fan engagement that was made evident during his continuous availability to initiatives such as member functions, pre-game Skype calls and genuine interest in fan/media engagement,” he continued. “Tony’s reign at the club was through a diffi cult period of restructuring of the team, which he carried out with no complaints, like a true professional, and got on with the job. “We wish him every success in the future,” Peter Storrie concluded.

Unlucky 13th loss for Mariners but not disgraced