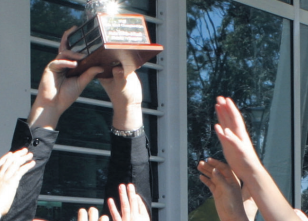 Mr Dave Dallinger holding the trophy up for the school band to see Photo: Deon Smit

It was a stunning performance at the Joan Sutherland Performing Arts Centre, Penrith. Adjudicator, Mr Nigel Weeks, said the standard this year was incredible. “I just can’t believe the standard of the junior bands, I’m really impressed. “I am just blown away,” Mr Weeks said. Gosford won with 190 points, just ahead of The Kings School, Parramatta on 185, in the Under 13 Division 2 championship. Mr Weeks noted said that Gosford Public School’s Band had an excellent set up.

That set up includes, conductor, Mr David Dallinger, co-ordinator, Ms Esther See and school principal, Mr John Anderson, as well as dozens of keen students. Mr Weeks noticed there were around 40 students in Gosford’s band. “It was a large amount of players with a real mixture of ability for the conductor to control. “The conductor did really well getting you to sound as an ensemble. “He chose a program playing to your strengths,” Mr Weeks said.

The program began with John O’Reilly’s Trumpets of Seville, in which Mr Weeks noted the trumpets’ excellence. “Then you played a very, very diffi cult section from the Phantom of the Opera, with different changes in key and pace. “The percussion section was excellent. “You made a really good effort with the Phantom,” he added. The band fi nished with Grease excerpts that saw a packed concert hall toetapping in their seats. Mr Dallinger said the band was amazing on the day. “They always fi nd an extra gear for performances and on the day they left the notes behind and just made music. “They played for each other and were brilliant. “They’re a fantastic group of young musicians and it is my honour to work with them each week,” Mr Dallinger said. But success was not overnight. It started a decade ago, when former Gosford-based teacher, Ms Sue Moore, saw students declining offers at Gosford Public because of a lack of band opportunities.

She began building up the band, and was joined by volunteer parent Ms Esther See. Ms See, who plays fl ute and baritone horn, remains as the band co-ordinator. “Having a co-ordinator gives the band someone who can focus on it and who is not a classroom teacher,” Ms See said. Principal Anderson congratulated Mr Dallinger and Ms See. “It’s a credit to them and the children involved,” he said. “It’s about opportunity. “To be able to compete with the State’s best, at their level, is far beyond what they’ve had in the past.” The students were tutored by Mr Dallinger (reeds), Ms Emma Jones (fl ute), Ms Pauline Ainsworth (brass) and Mr Joseph Smith (percussion).