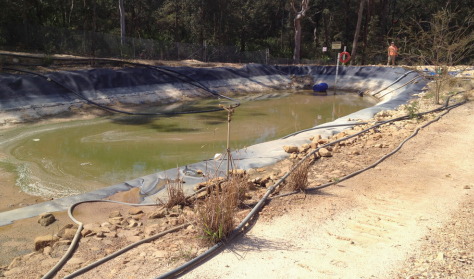 A Gosford Council photograph from 2012 of a leachate pond at the landfill.

A 2012 NSW Office of Water report – ‘Evidence gathered onsite indicates that the groundwater table has been intercepted by excavation with seepages noted up to approximately half the height of the pit’.

Through this period, the Office of Water appears to have been seeking assurances from both Gosford Council, as consent authority, and the operator, that activities at the site were compliant. In September 2012, Gosford Council commenced Class 4 proceedings in the Land and Environment Court. In October, 2012, the Office of Water refused to further consider Verde Terra’s application for Controlled Activity Approval. Earlier that year, in May, a NSW Office of Water groundwater project officer said “detailed work was urgently required to identify the highest potential groundwater table.”

Until the highest groundwater table was known, it was not possible to determine appropriate base pit levels at the landfill and “limit the potential for direct groundwater contamination issues. “As this is a drinking water catchment for a large population, consideration is warranted in changing the pit level to a higher elevation that would allow for a conservative buffer between the base of the pit and the highest predicted groundwater table. “The investigative work put forward thus far only identifies that a signifi cant risk is present and that detailed work is urgently required,” the memo said. “From the evidence outlined… it can be concluded that once the pit is filled, there is a high likelihood that groundwater table/levels will recover above the base pit level, and there will be hydrostatic pressure build up at the base of the liner.

“Under this hydrostatic pressure, there can be movement and heave in the landfill, resulting in a high risk of breaching the liner. “Additionally any sharp objects in the landfill would exacerbate potential for breaching the integrity of the liner. “Direct contamination of the groundwater resource would occur under such conditions.” Those concerns relate to the future cells that the current operator plans to line and fill with waste, however, a signifi cant amount of the existing landfill is unlined. Earlier Concerns expressed by experts within the Office of Water about the existing landfill, dated back to at least 2005. In January 2005, the then operator, Planet Earth Support Company, applied for a 3A Permit under the Rivers and Foreshores Improvement Act 1948, required for all works in or within 40 metres of streams and lakes on freehold land. In reviewing the application, an Office of Water employee (then part of the NSW Department of Natural Resources) said: “Information provided is sufficient to determine that there will be a significant impact on existing creeks and, as such, a permit under Part 3A of the Rivers and Foreshores Improvement Act 1948 should be refused.”

In a more detailed memorandum about the 3A Permit application, another officer said: “Site inspections undertaken in 2005 by Department of Natural Resources officers, with staff from Gosford City Council, have indicated that the current works are not in accordance with the approved Landfill Environmental Management Plan, 1997 or the Environmental Impact Statement 1992. “Principal areas of concern were: area proposed to be filled, and volume of material to be brought in has increased significantly; waste materials onsite were not inert building materials, but largely consisted of general, non-putrescible waste, of which council’s Woy Woy Waste Management Site was the largest supplier.

“This was seen as a potential conflict of interest on behalf of council.” According to the GIPA documents, as early as 2006, it was evident that the landfill was operating outside the terms of its approved development consent and that Gosford Council was aware of the situation. The Office of Water employee’s critique of the landfill operator’s proposed future plans for the site was scathing: “The … information does not accurately depict the actual works being currently undertaken on site; is not sufficiently detailed to allow assessment of the proposal; does not adequately describe how any impacts are to be mitigated; is not of a professional or enforceable standard.

“The proposal will generate leachate which has the potential to cause environmental harm. “The leachate proposal control measures in place are totally ineffective. “The Plan of Works does not adequately address how effective control is to be implemented. “The proposal is likely to intercept shallow ground waters. “Whilst there does not appear to be intent to extract this groundwater for use, the groundwater will possibly seep through the deposited waste material and contribute to the leachate potential. “Infiltration of surface waters and the seepage of groundwater also has the potential to contaminate receiving waters with leachate.

See our previous part of this story and in the printed edition for a full comprehensive report – pick up an edition at these locations.