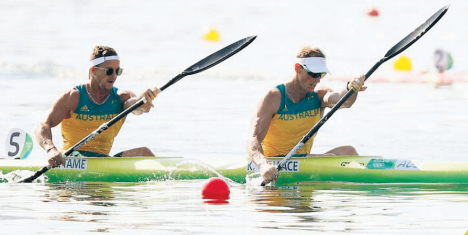 Avoca Beach has emerged as the Coast’s Olympic training ground with several of Australia’s Olympians poised to return to Avoca with the conclusion of the Rio Olympics.

Kayakers, Lachlan Tame and Riley Fitzsimmons, were stand outs for Avoca with Tame securing a bronze medal in the K2 1000m event while Fitzsimmons placed fourth in the fi nal of the K4 1000m. Born in Gosford, Tame who was already a World Championship silver medallist in the K2 1000m, competed in Rio with Gosford born and Gold Coast based, Ken Wallace, to secure the bronze in the K2 1000m. Tame joined the Avoca Surf Club as a fi ve year old and started paddling at age 16. In 2012, Tame made a bet with a friend that he could make the Olympics, and never looked back.

Tame first rose to prominence when he won the Australian Open Single Ski Championships in 2011. Tame went on to win the title another three times. Along with his K2 teammate and dual Olympian, Wallace, the pair won gold in the K2 500 (nonOlympic) and silver in the K2 1000 at the 2015 ICF World Championships in Milan. These events took their 2015 ICF World Series medal tally to seven. Tame and Wallace also won silver in the K2 1000m at the 2014 World Championships in Moscow. When away from the water, Tame is a selfemployed builder and Avoca Beach goer. Fitzsimmons debuted on the Australian senior sprint canoe team in 2015. Rio marked Fitzsimmons’ Olympic debut, having earnt his selection in the 1,000m pool with Olympic partner, Jordan Wood, after their third place performance behind Wallace/Tame and Stewart/ Clear at the selection trials.

Also in 2015, Fitzsimmons won two gold and a silver medal at the 2015 Australian Surf Life Saving Championships and took home gold in the K2 1000m race at the canoe sprint World Championships with Wood, in Portugal. Along with his K2 teammate Wood, the duo fi rst showed they were Rio ready when they defeated the 2015 World Championship silver medallists and Olympians, Wallace and Tame, in the fi rst 2016 Grand Prix regatta in West Lakes. Fitzsimmons started Surf Life Saving at age four at his local club, Avoca Beach. He fi rst started kayaking at age 15 and has balanced his lifesaving and kayaking passions ever since. Off the waves, Fitzsimmons is a volunteer lifesaver and is employed as a builder and apprentice carpenter. Avoca’s Jesse Parahi was also a standout for the region making it all the way to the quarter fi nals of the Rugby Sevens with the rest of the Australian team. Parahi was a key player in helping Australia qualify for the Olympic Games.

After a three-month stint playing in the NRL with the West Tigers in early 2016, Parahi returned to the Australian sevens program in April and eventually secured his position in the Rio Team. Parahi grew up playing both rugby league and union. He stopped playing league at 18 to focus on his sevens career, a move that paid off when he made his international debut in Edinburgh in 2010. Avoca was also represented in the commentators’ box when Avoca Beach Kayak Club Head Coach, Mr Matt Jones, was given a last minute stint as commentator alongside Channel 7’s Mr Brenton Speed. According to the Avoca Kayak Club President, Mr Paul Hutchinson, Mr Speed’s original commentating partner had to return to the country for personal reasons and Mr Jones, who had arrived in Rio only to cheer on Tame and Fitzsimmons, was given the nod as replacement commentator when his name was put forward by members of the kayaking groups present at the games.

The Avoca community rallied behind their Olympians coming together at the Avoca Surf Life Saving Club and the Avoca Rugby Club on August 18 and 20, to watch Tame and Fitzsimmons in their respective events. “The atmosphere was just brilliant and electric,” Mr Hutchinson said. “There were people crying and at a loss for words. “Everyone was just so full of pride for Lachie and Riley,” he added. Mr Hutchinson also said the success of Tame and Fitzsimmons could equal big things for the Coast’s kayak and rugby scene, with the Kayak Club, in conjunction with Avoca Rugby, engaging the Central Coast Council with plans for a new club house. “We have entered the fi rst stages of negotiations with Council to construct a club house as a joint venture,” Mr Hutchinson said. “Presently, the Kayak Club has no club house or home base so to speak, and the Rugby Club has nowhere for away teams to change, so we’re negotiating for a clubhouse that could service both clubs and improve the quality of life for both sports in Avoca,” Mr Hutchinson concluded.