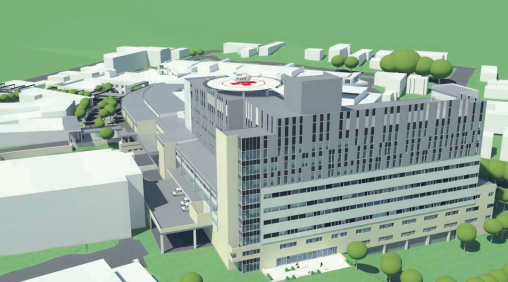 An artist's view of the redeveloped Gosford Hospital

The approved $368 million Gosford Hospital upgrade was one of the largest election infrastructure commitments made outside Sydney in the last NSW State Election, according to the Parliamentary Secretary for the Central Coast, Mr Scot MacDonald.

In an adjournment speech in the NSW Legislative Council on August 9, Mr MacDonald said Gosford had a reputation for delivering world-class care. “But we know that those standards are harder to maintain with aging buildings and dated assets. “Health infrastructure spending had grown from $917 million in 2010-11 to almost $1.6 billion in 2016- 17”, he said. “The Gosford Hospital redevelopment is certainly challenging,” Mr MacDonald told the Legislative Council. “The land footprint is constrained; it cannot easily expand, therefore existing assets have to be rebuilt or new buildings constructed as the health services continue,” he said.

The scope of the works being undertaken at Gosford would deliver: a new emergency department; a new intensive care unit; enhanced operating theatre capacity; new cardiovascular services; new maternity services; expanded paediatric services; new coronary care unit and inpatient beds; new medical imaging and nuclear medicine facilities; a new psychiatric care centre; expanded cancer services; a new main entrance; signifi cant additional inpatient beds including rehabilitation and geriatric services; and clinical and non-clinical support services. “Possibly one of the most anticipated improvements will be additional car parking,” Mr MacDonald said. “Any visit to the hospital would have staff and the public pointing out the dire shortage of parking,” he said. “By working with NSW Treasury, a new 800-space car park is being constructed.”

In May, following an inspection of the site, NSW Premier, Mr Mike Baird, announced the project was under budget and ahead of schedule. “Therefore the state was in a position to divert $20 million of savings into a Central Coast Medical School and Research Centre,” Mr MacDonald said. The centre will be collocated in the new 11-storey building and will bring 750 extra jobs to the Coast, Mr MacDonald said in his adjournment speech. “This is a terrific example of State and Federal Governments collaborating with the tertiary sector to introduce world-class research that ultimately will benefi t not just the families of the Coast but everyone across the nation,” he said.

“Gosford Hospital modernisation will be completed by 2019 with the main tower ahead of schedule and on track to be completed by the second half of 2018. “This outstanding work is to the credit of the contractor, Lendlease, the staff of the hospital and, in no small part, the board and senior management of the Central Coast Local Health District.” Mr MacDonald acknowledged the contribution of the district’s former CEO, Mr Matt Hanrahan who has recently moved on after 22 years with Gosford Hospital and the local district health organisation. “Matt deserves signifi cant credit for progressing the project, consulting the community and clinical staff and presenting a sound business case for the upgrade to the minister and treasury,” Mr MacDonald said.

Lifeguards on patrol from September 29