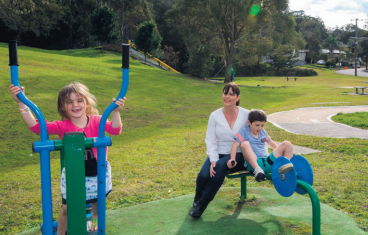 Ms Lucy Wicks announced her win in the seat of Robertson at her local park in Springfield on Wednesday, July 6. The Robertson vote proved to be a close race, with a small margin of 2093 votes putting the incumbent, Ms Wicks, ahead of the Labor Party’s candidate, Ms Anne Charlton.

Independent, Dr Van Davy, who ran on a “clean labour” ticket won 2.81 per cent of the first preference count in his first attempt at winning the seat. He was followed by Mr Robert Stoddart of the Christian Democratic Party (Fred Nile Group) on 2.66 per cent. Postal votes appear to have favoured Ms Wicks who attained 52 per cent of postal fi rst preference votes. The strongest individual polling booths for Ms Wicks were Terrigal, where she achieved a swing of 8.49 per cent to the Liberals compared with 2013, followed by a swing in her favour of 6.72 per cent at Pretty Beach.

The result was less favourable at booths such as West Gosford where there was a 3.97 per cent swing away from Ms Wicks and Ms Charlton gained a swing of 11 per cent. Kariong was another strong booth for Ms Charlton, where she grew the Labor Party’s vote by 9 per cent. Some of the strongest booths for The Greens were Copacabana and Avoca and Gosford City. One of the best booths for independent, Dr Davy, was Wyoming, where he secured 3.87 per cent of the vote. “My pledge to the people of Robertson will be that I will continue to listen, I will continue to advocate and I will continue to fight for every single person here on the Central Coast to make sure that we build a better future,” Ms Wicks said, when claiming the victory in the seat. “It is an extraordinary privilege I have to say, to put yourself forward to sit to serve the community, so I thank all of the candidates who ran and who gave up their time and efforts to this community,” she said. “I do pledge to continue to work every single day to fight with every fi bre of my being for a better future for the people of the Central Coast.” “I would like to let people know their votes do count, their votes do matter and their votes will change the future, I believe, of life here on the Central Coast.” Ms Wicks said 600 new jobs would be available in the Gosford area by the end of 2017, creating many more opportunities for people in this region.

She reaffirmed her promise to fund a medical campus in the heart of Gosford and said it was “a game changer for this region”. Ms Wicks said she intended to oversee the plans for a “world class performing arts centre in Gosford. “We have a great couple of years to look forward to,” Ms Wicks said. “I just love this job and I love this community and now we can actually fi ght to see that the projects underway are actually completed,” she said. The seat of Robertson had 108,509 people enrolled to vote for the July 2 federal election and achieved a turnout of 86.1 per cent of which, just over five per cent voted informally.