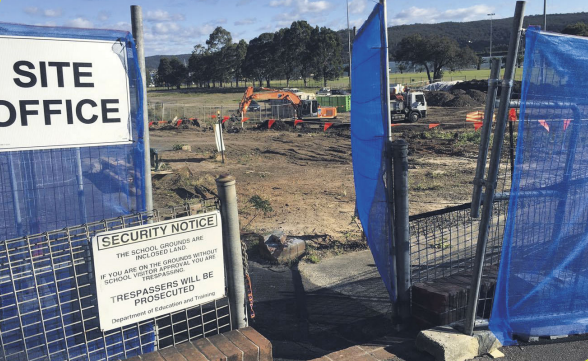 Doma Group is hopeful it will be able to start constructing the Australian Taxation Office’s new Gosford premises within the next six to eight weeks.

Doma Group development manager, Mr David Carey, said the Joint Regional Planning Panel (JRPP) upon granting deferred commencement consent at the end of June, had set three conditions that the developer had to comply with before it could get operational commencement consent. According to Mr Carey, the three conditions related to the design of the building’s plant room, relocation of the electrical kiosk to save a tree and the submission of updated plans to provide 13 additional car spaces along the extension of Baker St.

“We have addressed those three issues and submitted the additional information required to Central Coast Council so we are hopeful the formal go-ahead will come soon,” Mr Carey said. Although no construction work has commenced on the site to date, Mr Carey said remediation work is underway at the development site on the corner of Georgiana Terrace and Mann Street. Once Central Coast Council is happy that Doma has complied with the three additional JRPP consent conditions, Doma will need to acquire a construction certifi cate before the development can commence.

Mr Carey said he anticipated that process would be relatively quick because, as part of the JRPP review process, Central Coast Council had recommended approval of the development and had pointed out the areas that required additional work from the developer. “We have already appointed a certifier and we are already working through the certification process,” Mr Carey said. He said as a result of the certification work that has already been done, Doma were hopeful that construction on the site could commence within the next six to eight weeks. Mr Carey confirmed that none of the additional conditions set by the JRPP had been related to issues raised by the community regarding the ownership of the land or the former Gosford Council’s intent to make it part of a dedicated performing arts precinct.