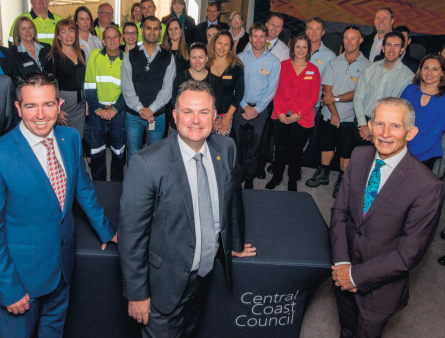 NSW minister for local government, Mr Paul Toole, said he promised ratepayers would not face any “exorbitant increases” in rates over the next four years.

Mr Toole made the guarantee during his visit to Wyong Civic Centre on June 16, his fi rst stop on a tour of the 19 new merged NSW councils. “One of the commitments that the NSW Government has given is a four year rate guarantee,” Mr Toole said. “This means that any new merged council will continue to follow their existing path of rates that they currently use as of today for the next four years. “This means that ratepayers won’t fi nd that there’s going to be any exorbitant increases in the rates that they are currently paying,” he said.

Mr Toole met with Central Coast Council administrator, Mr Ian Reynolds, CEO, Mr Rob Noble, and member for Terrigal, Mr Adam Crouch, as well as 35 council staff members to discuss the merger and present a $20 million cheque to help with merger costs and fund community infrastructure. Ten million dollars will be put towards the cost of amalgamation, as IT systems change over and a new logo is designed. “All of that will not be borne by the ratepayer,” Mr Toole said. The other half of the funding will go towards the Stronger Communities Fund, which aims to invest in community projects. Mr Toole said it’s still business as usual for the community after the merger. According to Mr Toole, the work done by the former Gosford and Wyong councils prior to the merger had contributed to its success so far. “Both the former Gosford and Wyong council’s staff have been talking about this now for six months. “They’ve been looking at ways in which they’re going to translate and bring this transition across together,” he said.