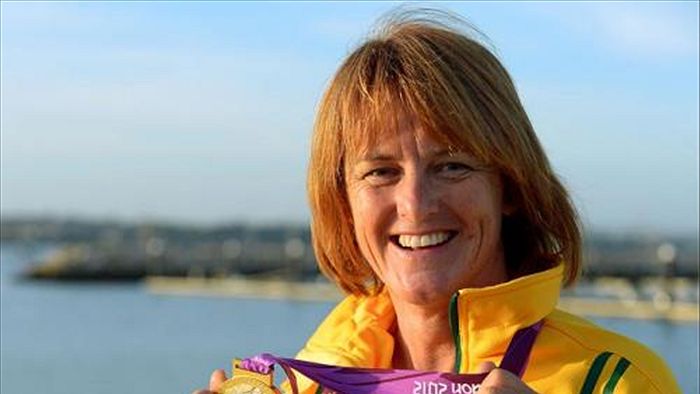 Liesl Tesch to defend her gold medal in Rio

It will be the seventh Paralympic Games for 47 year old Tesch, as the sport makes its fi nal planned appearance in the Paralympic programme this September. Tesch made her debut in sailing at the London 2012 Paralympic Games with crewmate, Daniel Fitzgibbon, where the pair took gold in the SKUD 18 boat class.

It was Australia’s first Paralympic gold in the sport since Sydney 2000. “Every single time you put on the green and gold it is like the fi rst time,” Tesch said. “Getting the uniform out of the bag is part of a symbolic journey on the way to represent our country, and there is the same amount of joy for the first time as the seventh. “I’m looking forward to defending the gold in Rio. “I’m always aiming to sail a great regatta, and eliminate errors, be smart and do it well.

“The motivation to compete has always been part of the team momentum, and I think I’m a lot more effi cient at my preparations for the games than I was at the beginning”, she continued. “Every race, and every training session is about giving it our all. “Rio is a really tricky course and we’ll be doing the best we can out there.” Tesch discovered a love of Para-sport during her rehabilitation from a bike accident as a 19 year old which left her with incomplete paraplegia. The Central Coast local fi rst competed in wheelchair basketball at the Barcelona 1992 Paralympic Games, and went on to lead the Gliders to two silver and one bronze before switching to sailing in 2011. “For me, competing is a way of life. “It is about setting goals and aiming to be the best you possibly can at what you’re doing. “It is about physical and mental wellbeing and feeling energised and alive,” Tesch said.

Australia has won four medals in sailing at the Paralympic Games, two gold (including one from Tesch and Fitzgibbon at London 2012), one silver and one bronze, since it was introduced as a Paralympic sport at the Sydney 2000 Games. Chef de Mission of the 2016 Australian Paralympic Team, Ms Kate McLoughlin, hopes to see Australia continue to shine in Rio. “I would like to congratulate Liesl on her selection to the 2016 Australian Paralympic Sailing Team,” McLoughlin said. “Liesl has shown she has what it takes to make it to the podium, and I look forward to watching as Liesl and Dan defend their Paralympic title in Rio,” she added. The Rio 2016 Paralympic Games will take place from September 7-18.